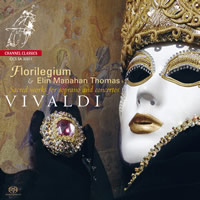 
Vivaldi’s instrumental chamber works cannot be dated with any certainty, nor do we know for whom they were written. Despite this lack of information, we can surmise he produced them for his pupils at the Pietà, perhaps during the late 1720's and 1730's. Bach, Telemann and several French composers all explored the chamber concerto medium to a great degree. 18th-century Italian composers, who concentrated on opera, sacred and secular music for the voice, appear to have ignored it, with the exception of Vivaldi.

A score of a flute concerto by Vivaldi was recently discovered by the musicologist Andrew Woolley among the Marquess of Lothian family papers in the National Archives of Scotland in Edinburgh. It is thought that the score of the concerto by Vivaldi, titled Il Gran Mogol, was collected in the 1730's by Lord Robert Kerr, the son of the third Marquis of Lothian, during a "grand tour" of continental Europe. During his Grand Tour, Lord Kerr may have actually attended a concert at the Ospedale Della Pietà, a major attraction for foreign visitors to the city. On that tour, Kerr, a flautist, is also believed to have acquired three pieces found in the same folder as the concerto. He was commissioned into the army in 1739, was captain of the grenediers and died at the battle of Culloden in 1746, fighting for government forces against the Jacobites.

Il Gran Mogol, referring to India or the Mogul empire, is believed to have been written by Vivaldi in the late 1720's or early 1730's as part of a quartet of short "national" concertos. The other three in this collection were entitled La Franca, La Spagna, and L’Inghilterro. All four of these concertos were referred to in the sales catalogue of an 18th-century Dutch bookseller, but only Il Gran Mogol has since been discovered.

Ashley Solomon and his superb period instrumental ensemble Florilegium continue to produce recordings of the Baroque repertoire for Channel Classics that are thrilling in execution and imaginatively conceived. This disc, simply entitled 'Sacred works for soprano and concertos', is no exception. Three concertos for various instrumental combinations frame two works for solo soprano - 'Laudate pueri Dominum' (RV601), an extended setting in nine sections of Psalm 113, and the motet 'Nulla in mundo pax' (RV630) – to make up a varied and eminently satisfying programme.

The brief 4-movement 'Concerto Madrigalesco' RV129 is the first item on the disc and was probably written for Vivaldi's pupils at the Ospedale della Pietà in Venice. The term madrigalesque is used to denote the strictness of its style rather than a reference to any type of vocal work though it does in fact use material from his 'Kyrie' RV587 and the 'Magnificat' RV 610.

The two vocal works on this disc are entrusted to the wonderful soprano of Elin Manahan Thomas whose vocal purity and accurate pitching yields performances of the highest quality.
The lovely 'Laudate pueri Dominum' (RV601) is believed to have been written for the Saxon Court in Dresden around 1730. Elin Manahan Thomas delivers the more reflective sections of the setting, such as 'A solis ortu' and 'Excelsus super omnes', with exquisite sensitivity and an innate feeling for the meaning of the text. Florilegium's accompaniments are exemplary throughout and especially memorable is the intertwining of Manahan Thomas's finely spun vocal line and Ashley Solomon's ethereal flute playing in the 'Gloria Patri' (Tr.11).

The motet 'Nulla in mundo pax' provides Manahan Thomas an opportunity to demonstrate the range and colour of her technique to maximum effect in the work's florid vocal writing . The opening 'Aria' is performed with touching simplicity while, following a short recitative, the final two movements with their runs and elaborate ornamentation, are delivered with seemingly effortless ease.

The flute concerto 'Il Gran Mogul' RV431a is a recent discovery. The score was unearthed amongst the papers of the Marquess of Lothian and is believed to have been collected in the 1730s by one of his ancestors Lord Robert Kerr, himself a flautist, during a 'Grand Tour' of Europe. The soft and finespun tone of Solomon's baroque flute and his agile playing in this work are a constant delight.

Among Vivaldi's prodigious output of string concertos there are comparatively few 'double concertos' and the one recorded here (RV547) is just one of only three for violin, cello, strings and continuo. The concerto is an immediately engaging work with a richly melodic slow movement in which the string soloists, violinist Bojan Cicic and cellist Jennifer Morches, are joined by the archlute of David Miller. The wonderful bouncing finale of this work provides a fittingly joyous end to this splendid programme.

The sound quality on this SACD, even by Channel's consistently high standard, is quite exceptional. The acoustic of the recording location - St. John the Evangelist church, Upper Norwood, London - bathes the instruments in a warm glow giving them an almost holographic presence and richness, while the voice of Elin Manahan Thomas is perfectly integrated with the accompaniments. Full texts and translations for the two vocal works are provided in the booklet, and these, together with the detailed and scholarly notes of Ashley Solomon add to the listening pleasure from this most desirable release.