Yes, a very interesting comment, Tony Reif. Though, reading what you say about some of the other recordings you own, I'm inclined to think that the "problem" (the quotation ...

It did nothing to hold my attention. The DTS-HD 5.1 mix didn't make me feel as if I were there. Very ordinary sound. Disappointing. 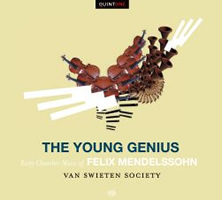 Another intriguing programme of period-instrument chamber music from The Van Swieten Society. This one focusses on Felix Mendelssohn, surely one of the most gifted of all musical prodigies. In both quality, sheer quantity and variety of expression, his early works easily put Mozart's juvenilia in the shade. This disc focuses on three pieces, not often recorded, which demonstrate the astonishing depth and breadth of the young Mendelssohn's output.

The Sextet for Piano and Strings in D major. Op. 110 dates from 1824 when Mendelssohn was but 15 years old (and look at the Opus number!). This has an unusual disposition of instruments, with only one violin, two violas, cello, double bass and fortepiano. Right away, in the first few bars, one can hear the warmth and richness of tone produced by this unusual combination. In many ways, one might view this piece as a miniature piano concerto, as the piano is rarely silent and has a really virtuosic part, dizzyingly whirling around any thematic material being sung by the strings.

Bart van Oort, a specialist in classical and early romantic piano music, plays a very well preserved piano by Zierer of circa 1830. With its wooden frame, it lacks the soundboard resonance of modern pianos, but has within its range a number of different tone colours, which lends much character to its execution. The treble is very well articulated and delicate in tone, the mid-range warm, songful and rich, while the bass is solid without blurring of rhythmic support. This means that the presence of the string bass is more clearly felt in the ensemble, and the two violas duet well with the piano's mid-range. Van Oort's sparkling playing is fully integrated into the ensemble sound, so that the piano never dominates.

The Sextet harks back to Beethoven and perhaps Mozart in its sure-footed clarity of form and structure. Its first movement whirls away with boundless energy and ends with a very grand coda; the Adagio is sweetly subdued; the Minuet is bold and almost a scherzo, while the Finale picks up the energy of the first movement, also ending with a sonorous coda.

Mendelssohn's Clarinet Sonata in E flat major also dates from 1824, and it harks back to Weber's clarinet sonata and concertos from the decade before. The young composer is well aware of the characteristics of the wind instrument, and his writing brings out the best of its voice-like singing tone. Frank van der Brink has appeared as guest principal clarinet with many European orchestras, and is also principal clarinettist with L'Orchestre Anima Eterna as well as playing with many other period instrument orchestras. His poised and expressive playing here is pure delight. This sonata is notable for the equality of its instrumentation, fortepiano and clarinet effectively duetting. Particularly notable is the finale, a lilting Siciliano, which may have been influenced by a movement thus entitled from Weber's Flute Trio (also recorded by The Van Swieten Society - Weber: Clarinet Quintet, Invitation to the Dance, Flute Trio - Van Swieten Society).

Perhaps the most jaw-dropping example of prodigy lies in the 11 year old Mendelssohn's Trio in C Minor for Piano, Violin and Viola which concludes the disc. The use of a viola rather than a cello solves certain balance problems brought on with the usual piano trio's cello, especially effective with the fortepiano. Most surprising are the Scherzo, which is an almost fully-formed thistledown-light example of Mendelssohn's trademark (as heard in The Midsummer Night's Dream and the Octet) and the Adagio, which carries an emotional depth akin to mid-Period Beethoven, seeming to come from a much older soul than an eleven year old's.

Graced with perfectly balanced transparent sound in a lightly ambient acoustic, this is an irresistible disc for chamber music and period performance lovers. The performances draw one in, as the joy of music-making together is quite unmistakable with the Van Swieten Society Players. Recommended!