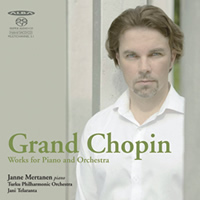 Alba records specialize in Nordic and off the beaten track repertoire with mainly Finnish artists and ensembles. Here we have an attractive compilation of Chopin’s works for piano and orchestra. The Krakowiak and the Andante spianato & Grande polonaise brillante are well known; The Grande fantaisie sur des airs Polonaises, less so, and the Variations sur ‘La ci darem la mano’ from Don Giovanni, practically not at all (Note: The Turkish pianist Idil Biret recorded all of Chopin, including this work, for Naxos RBCD, Vol. XV 1999).

For those who want to complete their Chopin piano/orchestral collection certainly an interesting disk. The more so since, from a musical point of view, there is much to enjoy: The sound is fresh and clean, the Turku Philharmonic (Finland’s oldest orchestra and fifth in size in the country) playing well and a young and enthusiast soloist.

On the other hand, apart from the Krakowiak and the Andante spianato & Grande polonaise, one should realize that the remainder of the program (31 minutes; more than half of the disk) does not rank among Chopin’s best works. The ‘variations’, the largest single piece on this disk, is a youth work (op.2), composed to introduce himself into the world of the concert hall. Like, as a matter of fact, the other three works, which brought him instant success on the musical scene amongst public at large.

Janne Mertanen is a well-known Chopin interpreter in the Nordic countries. He has won two (lesser known) piano competitions and successfully recorded a great deal of Chopin’s output. His playing on this disk is accomplished with a minor ‘accident de parcours’ in the 5th Don Giovanni variation (Alla Polacca) where he has some difficulty keeping up the rhythm in the (too?) fast sequence of notes. This, I think, may be largely due to a too large degree of daring enthusiasm towards the conclusion of the variations. On the whole, a sound ‘feeling’ for Chopin is undeniable.

Like in the Rota piano concertos, the piano takes a predominant place in the soundstage. But this is, to my mind, an almost universal phenomenon in modern recording. Tastes differ. Some want front row or even the conductor’s rostrum; others, like me, prefer a broader, overall impression.

To sum up: Possibly a must for Chopin aficionados, as these pieces are the only ones available in Super Audio, and a recommendation for those, who would like to widen their scope beyond the two piano concertos.