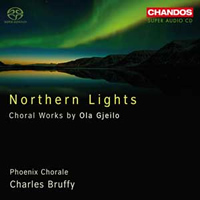 
The critically acclaimed, Arizona-based Phoenix Chorale (formerly Phoenix Bach Choir) originally focused on music of the Renaissance and baroque periods, but today is equally dedicated to the creation and performance of new music.

On this album the Choir performs choral works, and settings of sacred texts by the Norwegian composer Ola Gjeilo.

When he first heard Gjeilo’s Ubi caritas, Charles Bruffy was instantly hooked, finding the music ‘refreshing and magnetic’. Bruffy brought Gjeilo’s music to the Chorale and its audiences, and the response was immediate. Soon after, Gjeilo was invited to be the Chorale’s first Composer-in-Residence.

Phoenix, a setting of the Agnus Dei, is dedicated to Charles Bruffy and the Phoenix Chorale in honour of its fiftieth anniversary. When Gjeilo first visited the choir in Arizona, he had never been to the desert before, and the ‘quiet beauty and barrenness of the landscape’ moved him deeply. He describes Phoenix as ‘symphonic in nature… one of those pieces where the text is very much the servant of the music, not the other way around’.

In contrast, Northern Lights takes its inspiration from Gjeilo’s homeland, Norway, and the ‘terrible beauty’ of the natural phenomenon that may be observed there. The music reflects the powerful and electric quality of the northern lights, which must have seemed both mesmerising and terrifying to people in the past when no one knew what they were, and superstition prevailed.

The Phoenix Chorale made its first appearance on Chandos in 2004 with Shakespeare in Song. Since then it has released several joint recordings with its sister choir, the Kansas Chorale, featuring among others Alexander Grechaninov’s Passion Week, the disc nominated for a Grammy in no fewer than four categories, including Best Classical Album and Best Choral Performance, winning in the Best Engineered and Classical album categories.

Ola Gjeilo (pronounced approximately "Yay-lo") is a young Norwegian composer whose light is rapidly rising in the international music scene. He began composition at an early age, and was much influenced by the jazz playing of his father, a saxophonist. After studying for his Bachelor’s Degree at the Norwegian Academy of Music in Oslo, the Royal College of Music in London and the Juilliard School in New York, he completed his Master’s Degree in composition at Juilliard in 2006. Now based in New York, he is in great demand for concerts, commissions and recording engagements world-wide. A solo SA-CD has already been released (Gjeilo: Stone Rose - Gjeilo).

Although he has been determined to keep moving from teacher to teacher in order not to begin copying them or being too influenced, Ola Gjeilo's musical style is fundamentally tonal, with classical, jazz and popular music references. He also has a fine melodic gift, similar to that of Steve Dobrogosz (Dobrogosz: My Rose - Anne Sollie). Above all, he brings a strong creative and imaginative approach to his music, which is deeply felt and sincere.

Gjeilo is now the Phoenix Chorale's Composer in Residence, with this disc resulting from their new collaboration. It boasts no less than four Première Recordings and two pieces which were commissioned by the Phoenix Choir. The very first few moments of the disc open with the welcoming background ambience of the Carmelback Bible Church in Arizona, where the environment seems ideal for the Phoenix Chorale. Their stunning Grammy award-winning "Spotless Rose" disc was made at the same venue, and the new one is just as perfectly balanced and realistically detailed.

The engaging programme traverses both sacred and secular subjects, the sacred ones often disguised by Gjeilo's giving them unusual English titles rather than the usual Latin ones. Thus the opening "The Ground" is a setting of 'pleni sunt coeli' from the Latin prayer 'Sanctus, Sanctus, Sanctus'. Here, it marks the end of Gjeilo's Sunrise Mass, in a rich, almost symphonic setting of string quartet and piano (played by Gjeilo himself) with the full chorus. Some of these short Latin motets have become essential fodder for choruses these days, so there is a soaringly beautiful 'O magnum mysterium', an ecstatic response to the Christmas Story, which is real competition for Morten Lauridsen's now world-famous version. Gjeilo disguises it as 'Serenity', quite aptly, and has a lovely cello part to accompany it, played movingly by Emmanual Lopez - a master-stroke.

Two of the secular pieces caught my ears particularly. 'Northern Lights' is a Norwegian's musical description of the Aurora Borealis, one of the greatest sights amongst celestial phenomena, and its eyrie slowly convoluting glowing curtains of light are captured here by lengthy progress of dense tone-clusters. In contrast, 'Unicornis captivatus' features a spritely madrigalian reading from one of the bizzarre Bestiaries of Medieval times, which for many years had to stand in for science and medicine. Lightly and sweetly sung, with elaborate 'Allelluias' between verses, it has both charm and underlying wit which is most beguiling.

The bidding of Saint Augustus' poetic 'Evening Prayer' brings the programme to an appropriate close with the chorus accompanied by piano and also a ripely-contoured tenor saxophone solo played by Ted Belledin. This gives more than a nod to Jan Jarbarek, a fellow Norwegian who is famed for his obbligato accompaniments to Renaissance polyphonic with the Hilliard Ensemble.

The Phoenix Chorale are on top form here, clearly fully at home with their new composer's music and delighting in every magnetic moment. Charles Bruffy's vastly-experienced direction is as usual sensitive and technically assured. I am trying not to be too effusive here, because this music (and its singing) had a considerable emotional effect for me. Gjeilo's poise, depth of humanity and root simplicity comes across in every bar, making this a very memorable experience.

Given an impeccable recording, both in stereo and multichannel modes, well-written and fulsome notes with full texts in three languages, and a truly heartfelt performance, there is only one word to describe this album. Unmissable.