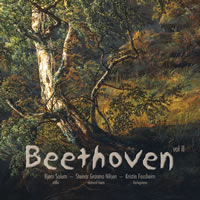 
Ludwig van Beethoven, The French Revolution and the transition from Classicism to Romanticism are all terms which belong closely together. Beethoven's Sonatas for Fortepiano and Cello or Horn clearly demonstrate the connection - they were composed throughout his entire creative career and tell a continuous story, a musical and historical testament, of maturity and change. In this eminent recording we are given the opportunity to a direct encounter with the powers of Time and Aesthetics.

"Forced to live with a permanent physical disorder, born with a fiery temperament, I had to isolate myself, live my life alone." The musical genius that lost his hearing never succumbed to fate. On the contrary - over and over again he managed to adjust to the shifting phases of his life and art. As a creative artist, Beethoven stood for constant renewal throughout his entire career, and he never hesitated from sharing his innermost feelings with his listeners. The three sonatas on this CD were created in three different phases - meet the young, the struggling and the mature Beethoven in an intense and lucid performance. "I will fly at fate and attack it - it will never succeed in striking me to the ground!"

Another enterprising release from 2L, coupling 2 cello sonatas with the first recording of the horn sonata to be issued on SACD.

Another first (for the cello sonatas) is that this disc is played on period instruments and so is competing in a different way to Beethoven: 5 Cello Sonatas - Wispelwey, Lazic for our attention. In Op. 5/2, all goes well and one might argue that the inclusion of all repeats counts in favour Fossheim and Solum when Wispelwey and Lazic do not. The playing of Nilson in the horn sonata is heroic and has no little virtuosity.

It is sad to report then that, in the late cello sonata Op.102/1, the intonation of Solum is sadly wayward all too often in the many taxing passages of the concluding Allegro vivace. By contrast Wispelwey absolutely nails these same passages; both he and Lazic are a good deal more characterful and show greater insight in both this and the earlier sonata.

The recording is up to 2L's usual house standard and the performers are placed in a conventional concert hall arrangement.

Sadly not recommended for all the potential that could have been fulfilled. 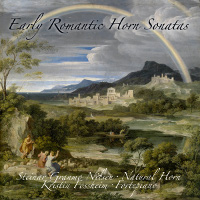