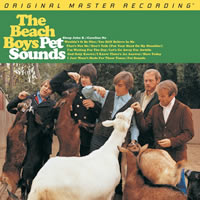 
Awash In Oceans of Sound: Production As Legendary as the Incredible Music, Laden with Unorthodox Instrumentation and Layers Upon Layers of Sound
No album comes more vetted than the Beach Boys’ Pet Sounds. Universally renowned for its groundbreaking songs, majestic arrangements, landmark production, emotional lyrics, and bold creativity the 1966 record forever altered the pop-culture landscape and how everyone experiences music. Hailed not only by the international press, the set also remains prized for its impact on countless artists that changed their approach after beholding its sheer scope and genius. Household-name musicians including Paul McCartney, Elton John, Roger Waters, Elvis Costello, and Bob Dylan cite Pet Sounds as being among their favorite LPs and for influencing their direction. Now, it’s time you heard the best-possible version ever made available.

Famous for its use of multiple layers of unorthodox instrumentation, harmony-based choruses, ensemble refrains, blended reverberation, and recurring echo, the record’s sonic pastiches arrive with unrivaled airiness, immediacy, transparency, width, and depth. Even those that swear by the mono version will find their minds (and heads) blown. Enhanced, too, are Brian and Carl Wilson’s spiritually informed high-register vocal performances, now unbound by any connection to artificial ceilings or veiled frequencies. Prepare to swoon.

Encompassing psychedelic, pop, baroque, and even prog-rock styles, and distinguished with eminently personal lyrics that delve into themes of love, innocence, hope, and loneliness like few records before or since, Pet Sounds’ brilliance cannot be exaggerated. Neither can its sway.Beach Boys mastermind Brian Wilson weaves organs, harpsichords, Theremins, dog whistles, bells, exotic strings, and just about every other imaginable sound effect amidst traditional instrumentation in sculpting rich symphonies marked by some of the most innovative, heartbreaking melodies ever composed. Flush with multi-colored soundscapes, the lush arrangements open up to seemingly impossible worlds of sound that still leave listeners agog.

It’s easy to go on at length about Pet Sounds’ legacy—the masterwork inspired the Beatles’Sgt. Pepper’s Lonely Hearts Club Band, remains the touchstone for all serious pop music, and stands as a standard-bearer of near-perfect record production—but we’d rather steer you to securing this remastered collectable edition and hearing what’s in store.Mobile Fidelityhas never been prouder to put its stamp on a classic. So go ahead, rediscover the monument that is Pet Sounds.

Stereo mixes produced and engineered by Mark Linett at Your Place Or Mine Recording Studios, Glendale CA, January - February 1996 under the supervision of Brian Wilson
Tracks

When the bulk of DVD-A's were issued the site was SACD only - in fact, it was sa-cd.net. I recall one of the administrators a while ago saying that when the new site broadened its brief they considered the DVD-A catalogue but decided it wasn't worth backtracking to try and include it.