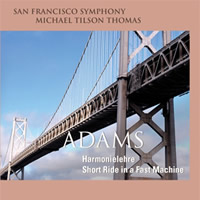 
This recording represents the latest chapter in the long time collaboration between composer John Adams and Michael Tilson Thomas. Here, MTT and the San Francisco Symphony perform Adams' orchestral masterpiece Harmonielehre, a milestone of American minimalism first premiered by the orchestra in 1985. Paired with the joyful Short Ride in a Fast Machine, this new release from the GRAMMY-® award winning San Francisco Symphony is a must-have for any collection.

This is an essential recording for both aficionados of the music of John Adams and audiophiles alike. And, thanks to the internet, prospective purchasers of this SACD, as well as those new to Adams, can get entertaining insights into the two pieces on this disc from the composer and the conductor in these two short clips from sfsymphony.

'Harmonielehre', a large scale orchestral piece in three parts, was premièred in 1985 by the San Francisco Symphony conducted by Edo de Waart. Part 1 has no title but Adams describes it as “a seventeen-minute inverted arch form: high energy at the beginning and end, with a long, roaming Sehnsucht (yearning) section in between”. Part 2 is entitled 'The Anfortas Wound' (the mythological medieval King Anfortas is a Jungian archetype for a sickness of the soul that leads to depression and impotence) and the title graphically conveys the music's anguish, in which Sibelian bleakness and echoes of Mahler (the 'Ninth Symphony' and 'Das Lied von der Erde') seem to entwine and fuse. The final section entitled 'Meister Eckhardt and Quackie' is a glitteringly scored berceuse that “gradually picks up speed and mass...and culminates in a tidal wave of brass and percussion over a pedal point on E-flat major”.
Michel Tilson Thomas and the San Francisco Symphony give an authoritative account of this imaginative and gripping work born of familiarity with Adams' idiom.

'Short Ride in a Fast Machine' dates from 1986 and together with 'The Chairman Dances' is probably Adams' most popular and widely performed composition – a sure-fire crowd pleaser.
Tilson Thomas's performance though perhaps lacking just a fraction of the driving energy and high voltage playing found on the recordings by Edo de Waart and Simon Rattle is nevertheless quite thrilling.

Those who have heard or purchased any of the Mahler recordings on this label will know what to expect from the sound quality on this disc and they will not be disappointed – it is absolutely breathtaking. The dynamic range is huge yet it is easily accommodated in the domestic situation thanks to the way in which the hall's acoustic signature has been captured in marvellous multi-channel sound. No detail of Adams' glittering and at times sensuous orchestration is missing.

Though these performances were recorded live at Davis Symphony Hall (Harmonielehre, December 8-11, 2010 and Short Ride in a Fast Machine, September 7, 2011) audience noise is virtually absent. The retention of enthusiastic applause, cheers, and whistles of pleasure at the conclusion of both works seems entirely justified on this occasion. One's only grumble is the short playing time of 47' 09” for a full price SACD, but in my view quality will always trump quantity.