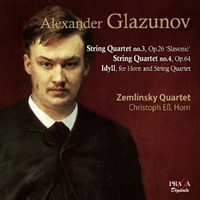 
A homage to Glazunov who taught classical art to Russian composers of the 20th century and revealed chamber music to a community favouring choral and lyric art. His cosmopolitan students, who numbered Stravinsky and Prokofiev amongst them, and his heirs from the interior including Miaskovsky, Shostakovich and Weinberg, were thus able to be major players in the contemporary world. His own works are now being rediscovered and appreciated for the perfection of their craftsmanship, like those of a Russian Mendelssohn singing in his genealogical tree.

Praga Digitals have given us some excellent chamber music from well- and lesser known Eastern-European composers. This time a disk of two of Glazunov’s seven quartets, for which they have hired the services of one of the best Czech quartets around. Is this the first installment of a complete set on SACD? In that case a closer look seems all the more useful.

In spite of being a child prodigy, a mostly self-educated composer and very popular in his time, Alexander Glazunov never seemed to have made it to the ranks of famous Russian composers. Nothing is really bad, but nothing is really outstanding either. The magic baton of the ‘geniuses’ must have gone past without touching him.

In line with the nationalistic ideas of the ‘Mighty Five’, he was an advocate of Russian music, notwithstanding the frequent use of Western-European techniques. He furthermore tried to reconcile the differing views of the conservatoria of St. Petersburg (of which he later became a Director) and Moscow. He also was always ready to help others, orchestrating or finishing things. He was, in a way, a jack of all trades, rather than someone who went his own way, and certainly not an innovator.

Some see in him the synthesis of Russian composing, making him a new point of departure, and hence an excellent teacher for the next generation and his (later famous) pupils; others, however, hold the opinion that his compositions are a mere melting pot of different styles and techniques in a deliberate attempt to please. Indeed, his musical output is mostly ‘inoffensive’, melodious and lyrical. This is clearly demonstrated in his fourth symphony (I refer to a decent account of Gennady Rozhdestvensky with the USSR Ministry of Culture Symphony Orchestra on Melodiya, reissued in a complete set in 2011). It was an instant success. He continued this recipe, until he got tired of repeating himself (so the rumour goes).

He may not have been a musical genius, but as far as composing is concerned he certainly was a master in ‘recreating’ (not copying) tunes which can easily be associated with those from countryside and village squares into a ‘Russian’ score, in this particular case for chamber players serving the upper echelons of Russian society.

The third, ‘Slavonic’ string quartet, which I had not heard before, shows this ability in a well-developed, albeit qualitative not always evenly balanced score. After an interesting introduction, the first movement becomes repetitious; the music ripples on like a stream down a sloping meadow. The second movement is, in spite of some beautiful playing, somewhat bland and mostly non-descript. The scherzo and final movement, however, are considerably more interesting, with attractive writing, suggesting authentic folk tunes.

The 4th quartet is said to be inspired by Tchaikovsky and modeled along the lines of Brahms’ string quartets. In actual fact it follows patterns similar to the previous one, showing real craftsmanship in the scoring, but less so in emotional and musical content; seemingly borrowing elements from Borodin, notably in the Scherzo. In the final analysis I cannot but conclude that it reaches neither the level of Borodin nor that of Brahms.

Yet, anyone enjoying this kind of uncomplicated chamber music will discover numerous pleasantly entertaining moments, especially taking into account the highly accomplished playing of the Zemlinsky’s, doing their best to make up for what’s missing. What a formidable group of musicians!

As to the sound quality: With modern surround technique a string quartet can easily be blown out of proportion, as if there is a full string orchestra on stage. Here, the recording engineers have been much more prudent. Maybe a little too prudent, at least for my taste: The sound stage is not as wide as some would wish, and the violins and the viola have been given the upper hand, pushing the cello into the background, thus robbing the overall sound of a substantial part of its warmth. Played at higher volume things even out somewhat better, though.

Special mention should finally be made of the Idyl for horn (well played) and string quartet. It’s a most delicate ‘bonbon’ for a lazy Sunday afternoon, to which you can easily and pleasantly snooze away after a copious lunch.