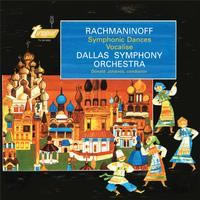 Donald Johanos conducts the Dallas Symphony Orchestra. Little needs to be said about this audiophile classic. During his eight-year tenure as conductor, Johanos made notable recordings with the DSO, including this rendition of Rachmaninov's Symphonic Dances. He also appointed Paul Freeman associate conductor, one of the first blacks to serve in such a post in the Southern US, prompting threats to both conductors.

"The tape recording was made at a speed of 30 inches-per-second, using a transport modified to produce exceptionally good motion: a specially developed constant-velocity recording curve was employed for improved signal-to-noise ratio. The lacquer masters were made directly from the original tape, thus avoiding further transfer degradation. The result is a recording of exceptional clarity, naturalness and freedom from vices prevalent generally in the art." - from the original liner notes

This is a real marmite disc that has developed a cult following and never gone out of publication. Also available in double vinyl 45rpm in pressings which literally have the tens of thousands of pounds turntable guys drooling. Personally I found only marginal difference between this SACD and the very good "VOX BOX" issued years ago comprising mainly Ives and these Dances on 2 CDs. Certainly not enough to justify the £50 difference in price considering also that this was not produced as a multi channel recording but simple stereo. In fact the master tapes are extremely dry with little or no acoustic though a touch of space (probably artificial) seems to have been added in the SACD. But that's not the point.

What really distinguishes this recording from all the rest is super clarity resulting in a stunning analogue warmth and naturalness in the instrumentals, especially the winds, the Dallas strings sounding quite thin and lacking the impressive sweep achieved in the comparable Everest album from the fabulous LSO and Eugene Goossens. Donald Johanos has a tight grip on the music with measured but brisk tempi that never deviates into the occasional self conscious dragging of Bychkov or the wild abandonment of Gergiev, the latter trying to emulate Kondrashin ("Beyond what is possible") and ending up in a mess.

From a technical point of view this recording was part of that experimentation with ultra fast tape speeds, 35mm magnetic film, new microphones and early multi tracking that marks the end of the stereo golden age. Along with Mercury, Everest and RCA Living Stereo, this album is an essential part of that story and hence an essential collector's recording.