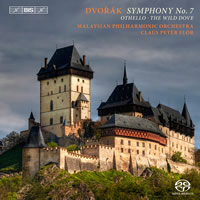 
With highly acclaimed releases of Smetana's Má Vlast and Josef Suk's 'Asrael' Symphony, Claus Peter Flor and his Malaysian Philharmonic Orchestra have more than proved their credentials in this Central European repertoire: 'What a great piece, and what a great performance' wrote the reviewer on website Classics Today about 'Asrael', while his colleague on MusicWeb International felt that the orchestra in Má Vlast had 'an appropriately epic sweep and technicolor brilliance', dispatching the work 'with really striking dramatic flair.'

As the undisputed heir to Smetana as front figure of a Czech national style, and as mentor and father-in-law to Suk, Dvořák is the logical next step for the team, who here perform the Seventh Symphony, by many regarded as the greatest of them all. With its strikingly sombre and impassioned tone – often said to reflect the composer’s sorrow at the death of his mother – it was an immediate success at the first performance in London 1885.

This work is followed by two later single-movement orchestral pieces, for which Dvořák found inspiration in literary sources. The model for the concert overture Othello is of course Shakespeare's tragic hero, although the aim of the composer was to express the strongest possible human emotions in music, rather than creating a musical retelling of the drama itself.

For Holoubek – the Wild Dove – Dvořák had recourse to an epic poem by the Czech poet Karel Erben, and this time he did include a programme based on the poem in the published score: a young widow is wooed by and marries a wealthy farmer, but when she hears the mournful cooing of a dove sitting in a tree by her first husband's grave she is overcome with remorse – she had in fact poisoned the man – and commits suicide.

Make no mistake, this is a real power-pack of Dvorak's late orchestral pieces. The 7th Symphony, shortest of the cycle except for the 3rd, is here a cogently argued masterpiece of dramatic contrast quite unlike the rest of the symphonies. Set during a sombre period of the composer's life (resulting from his loss of an eldest child and his own mother), it has a powerful and inventively structured form which carries great impact. Indeed, it is held by many to be at the zenith of Dvorak's symphonic composition skills.

In the symphony's outer movements, Flor is notably more expansive than Szell in his classic recording with the Cleveland Orchestra. Szell's first movement is impelled with a sense of ominous expectancy from the start, and becomes quite rough later on. Flor has more respect for Dvorak's instruction of "majestic" for this movement, and his response to the gentler second theme is more sweetly dancing and joyful. Come the development, however, he and his ever responsive orchestra really turn on the power for a grimly passionate reading, breaking into a massive and zestful accelerando for the blazing bars near the end, which ultimately collapse almost exhausted into a mere thread of ppp murmuring.

Flor's more limpid and nuanced woodwinds (not as pungent and characterful as those found in Czech orchestras) are voiced exquisitely for the sorrowful pain of this movement, which is deeply remembered with stabbing chords, ripe horns, brass fanfares and healing woodwind. Szell is more overtly lyrical, especially in the warmth of his strings, but somewhat plainer. In the Scherzo, Szell is characteristically ebullient and assertive, whereas Flor and the MPO obey the score and begin with a delicate, slightly tentative and vulnerable dance-like opening, which is most touching. This acts as a perfect foil for the later high-energy form of the dance, carried off with virtuoso brilliance.

The Finale, in a pounding 2/2 metre, has fewer tunes, but rather contains material which is ripe for development. There is relatively little of Dvorak's folk idiom, but much passion and dynamic contrast. Szell is certainly gritty and powerful, but Flor offers more light and shade, with his slower tempo (about a minute slower than Szell). He and the MPO enter the final strait with a terrific attack, however, leading to a massively grandiose conclusion which is truly elating.

The remaining pieces on this disc are far more than make-weights. Both are superb examples of Dvorak's other favourite forms; the Overture 'Othello' for large orchestra (14'09), and the Symphonic Poem 'The Wood Dove' (18'50), also for large orchestra. Flor's 'Othello' is a performance of outstanding stature and questing narrative. Dramatic scenes are almost pictorially depicted, soaked in blood as Shakespeare has his characters; a tragedy of love, greed and envy which the orchestra relishes through to their almost manic last few bars.

'The Wild Dove' is also gripping in its own macabre way. It opens with a notably cold funeral march for a woman's first husband (she has secretly poisoned him). After, a wealthy and jolly peasant man proposes marriage to which she agrees, and there is a glittering, joyful and vigorous country wedding scene, with whirling dances and much colourful orchestration. Soon, however, the woman's conscience begins to affect her, and after she is shamed in a confrontation before a magic Wild Dove (in a Wagnerian forest scene), the guilty woman goes mad and drowns herself. Flor manages his convincing sweep of the story to be as taut as in 'Macbeth', producing another memorable and excellent performance.

Given a first-class BIS recording, from a perspective about a dozen rows back from the concert platform and with plenty of air around the orchestra, this disc is more than the sum of its parts. Perhaps Flor's very dark, intense 7th Symphony would not be a first choice for many, but nevertheless it is a valid and most interesting reading, particularly in the context of 'Othello' and 'The Wood Dove', with which it combines to make a very enjoyable programme. Highly recommended.

The two previous reviews are spot on regarding the performances here - splendid in every way! Flor and the Malaysians milk every ounce of drama (and there is a lot of it) from the Symphony 7 score all to the benefit of the music. The rhythmic material is taut and precise and the overall level of playing is quite astounding. Flor handles the dynamic contrasts beautifully and the orchestra responds in kind. These same traits apply to the accompanying Othello and Wild Dove tone poems.

Sonically, I am perhaps not quite as impressed with this as the other reviewers. The perspective (in stereo) is from mid-hall where I prefer something closer with less hall sound. Tonal balance is good though the top end of the violins is not as smooth as I've heard in other SACD recordings (including many on BIS). Jens Braun is credited as the sound engineer for the Symphony (Hans Kipfer for the tone poems - which were taken down about 9 months before the symphony) and the booklet states a resolution of all three works as 24 bit/48 kHz. I am not convinced that the resolution plays much of a role in my slight criticism of the sound - rather, perhaps the microphone placement was the key. That said, the tone poems are just a trifle better sounding especially with regard to the upper string tone. I am picking nits here because overall this is a very good recording. I am very glad to have it in my collection. Highly Recommended. 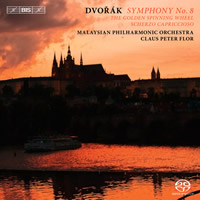