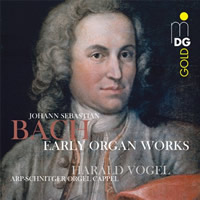 
Walcha’s legendary Bach recording from the 1950s for Archiv made the Cappel organ world-famous and the famous Schnitger organ is once again in excellent condition. Harald Vogel and the MDG team have seized the opportunity to record early works by Bach using the latest recording techniques including the infamous Toccata in D minor.

Even though this is a new recording, I suspect I will not be the only having a trip down memory lane with this disc.

Here, Harald Vogel records an appealing mixture of chorale preludes, fantasias and some of the big preludes or toccata's and fugues that Bach composed relatively early in his life, including "that one". Vogel & MDG are always careful to alternate the listening experience so there is no unremitting diet of fugues or chorale preludes and an inspired choice was to include the Prelude and Fugue in G minor (BWV 535) for it is remarkably similar in ideas and development as its more famous and sometimes disputed authorship of the Toccata and Fugue in D minor (BWV 565). "The" Toccata and Fugue is given a very good performance but those used to more "romantic" interpretations may be surprised how light the registrations chosen are - still powerful and effective though on this smaller scale. Another musical gem of an idea is to put the radically differing fugal treatments of a melody by Corelli by Corelli himself and Bach; there is less than 20 years between the two approaches and it points up exactly how revolutionary Bach was, even though this is a relatively short of fugue of "only" 6 minutes duration.

Now - why "memory lane"? Well, those listening to Bach organ music recorded the 1950's and 1960's cannot fail to have heard at least one disc of Helmut Walcha. It was my first exposure to Bach's organ music and hearing the same organ registrations & textures that was used by the past master bought memories flooding back. Needless to say, Vogel is very much his own man and his accounts are somewhat less rigid than Walcha preferred. The notes devote as much space to the organ as they do the music and if that is not enough, http://www.arpschnitger.nl/scappel.html provides a comprehensive discography, beautiful photos and reproduces the text accompanying one of the aforementioned DGG LP's penned by Walcha himself.

The sound itself is wonderful and one can almost reach out and touch the clean lines of the St. Peter und Paul church in Cappel, Germany.

Recommended. I'll give the performance 4.5 stars but please sample as I am aware I may well be influenced by nostalgia here!