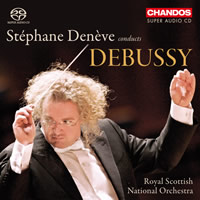 
Recognised internationally as a conductor of the highest calibre, Stéphane Denève took up the post of Music Director of the Royal Scottish National Orchestra in 2005, and has since attracted attention from audiences and critics alike. This May, the conductor bids a fond farewell to Scotland and the RSNO with a series of ‘Au Revoir’ concerts, and of course, this disc of orchestral works by Debussy.

After the impact made by the production of Pelléas et Mélisande in 1902, the next orchestral work by Debussy was awaited with intense interest. La Mer did not disappoint, and is today widely considered to have been crucial in its influence on twentieth-century music. After completing this work, Debussy spent no fewer than seven years wrestling with what were to become Images for orchestra. Some critics were puzzled by the work and suggested that Debussy’s talent might have dried out. They were promptly put right in an article by Ravel, who accused them of ‘slowly closing their eyelids before the rising sun amid loud protestations that night is falling’.

With a sultry flute solo, Prélude à l’après-midi d’un faune opened an astonishing new world for western music. Debussy based this composition on a poem by Mallarmé, who wrote to the composer: ‘I have come from the concert, deeply moved: A miracle! that your illustration of L’Après-midi d’un faune should present no dissonance with my text, other than to venture further, truly, into nostalgia and light…’

The three Nocturnes feature some of Debussy’s most imaginative orchestral writing. In the words of the composer, ‘the title Nocturnes is… not meant to designate the usual form of a nocturne, but rather all the various impressions and the special effects of light that the word would suggest’. Debussy provided descriptions of the three movements. ‘Nuages’, for example, depicts ‘the slow, melancholy procession of the clouds, ending in a grey agony tinged with white’, and also the experience of standing ‘on the Pont de Solférino very late at night. Total silence. The Seine without a ripple, like a tarnished mirror’.

For Stéphane Denève, the out-going musical director of the Royal Scottish National Orchestra, recording this collection of Debussy's orchestral works has obviously been a labour of love. Denève's seven year contract with the RSNO ends this season when he becomes the chief conductor of the Stuttgart Radio Symphony Orchestra.

In the liner notes accompanying this set Denève writes of his long admiration for Debussy's music and provides illuminating insights regarding his own approach to performing it. He stresses the need for clarity, energy and rhythmic precision and eschews the idea of any impressionistic 'blur'. How successfully he has achieved these aims is self-evident by auditioning any section of the nine compositions on these discs.

These two generously filled SACDs – almost two and a half hours of music - contain all of Debussy's most important orchestral works as well as a few rarities that include the delightful early symphonic suite 'Printemps', two short extracts from Debussy's scène lyrique 'L'Enfant Prodigue' and most appropriately the 'Marche écossaise sur un thème populaire'.

The RSNO has been described as the best French orchestra north of Calais and on the basis of these performances there is much justification for this complement. Denève elicits alert and precise playing from his fine musicians and illuminates many details even in the most familiar and often recorded scores - 'Images', 'La Mer', 'Nocturnes' and 'Jeux'. The importance of both the descriptive and balletic nature of 'Jeux' is emphasised not only by Denève's evocative interpretation and lightness of touch in Debussy's final masterpiece, but by the happy idea of printing the full scenario of the ballet in the liner notes and assigning it ten separate tracks (disc 1 trs. 6-15) to allow the listener to follow the course of the action.

With collections like this where personal taste plays such an important part, it is unrealistic to expect every one of these performances to appeal equally to all listeners, but nowhere did I find Denêve to be less than compelling, and for the most part utterly convincing, in his interpretations.
On a personal note, I would have liked a little more ebullience and élan in the outer sections of 'Iberia' which perhaps sound a little stiff when compared to the incomparable performance of this work by Charles Munch and the Boston Symphony Orchestra Ravel: Bolero, La Valse, Rapsodie Espagnole - Munch, though in the middle section 'Les Parfums de la Nuit', Denève does effect a marvellously sensuous and languid atmosphere. A highlight of the set is the poised account of the 'Prélude à l'apres-midi d'un faune' that features Katherine Bryan's ravishing flute solo.

The Chandos 5.0 channel surround sound recording, made in 24 bit/96kHz, provides both the warmth and clarity that Denève wishes to achieve in this music and the acoustic signature of the Royal Concert Hall, Glasgow is most appropriate to the realisation of those aims. The orchestral image is slightly distanced rather than being overtly analytical, and the sense of depth is well conveyed – as in the off-stage trumpets in the central section of 'Fêtes' (disc 1 tr.17) – while Debussy's use of delicate percussion in, for example, 'La Mer' is crystal clear .

The superb playing of the RSNO throughout this set is indicative of the affection and respect with which these musicians hold Stéphane Denève, and this outstanding release is a fitting testimony to the completion of this conductor's impressive tenure with the RSNO.