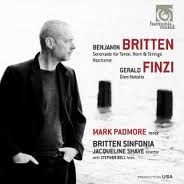 
Celebrated tenor Mark Padmore joins with Britten Sinfonia in some of the most beautiful English music for voice and orchestra. The centrepiece is Benjamin Britten's magical evocation of twilight and nightfall, the Serenade (with Stephen Bell, horn). In Gerald Finzi's song-cycle Dies Natalis, the ecstatic mood reflects a child's wide-eyed wonder at the world. Britten's poignant Nocturne completes the programme.

Mark Padmore is a singer whose vocal accomplishments are matched by his musical intelligence, and both these qualities are manifestly displayed on the marvellous SACD.

It was an inspired idea to couple the two Britten vocal works with Gerald Finzi's masterpiece 'Dies Natalis' rather than, as so often, a third composition by Britten. In all three works Padmore's diction and intonation are faultless, but it is his total identification with the wide range of emotions expressed in these poems that make these performances so special. Even after half a century, comparisons will be made in the Britten cycles with the composer's own recordings with Peter Pears that have dominated the catalogue since their first release over half a century ago, yet Padmore's interpretations easily match them in depth of perceptiveness and many would argue even finer vocal beauty.

In the 'Serenade for tenor, horn and strings' Padmore has the advantage of the articulate and thrilling horn playing of Stephen Bell who triumphantly overcomes with apparent ease the fiendish challenges thrown at him by Britten's virtuosic writing for the instrument. The delicacy and agility of his playing in Ben Jonson's 'Hymn' contrasts with the full-throated sound he delivers in Tennyson's 'Nocturne' and the nightmarish images he evokes in the Anonymous 15th century 'Dirge'. Padmore's account of the cycle's centrepiece – Blake's 'Elegy' – is delivered with frightening intensity.

The eight songs that comprise Britten's 'Nocturne for tenor, 7 obbligato instruments and strings ' concern sleep in all its manifestations. Padmore 's singing captures the humour of the Middleton setting without recourse to exaggeration, and his voice conveys the terror implicit in the excerpt from Wordsworth's 'The Prelude' at the words “Sleep no more”. The performances of each of the seven excellent obbligato instrumentalists of the Britten Sinfonia in this work are both characterful and immaculate in execution, and it would be wrong to single out any one individual for special praise. Jacqueline Shave's vital direction of her players is a further incentive to acquire this disc.

That quintessentially English work Finzi's 'Dies Natalis' completes this programme. Finzi sets texts by the 17th century poet Thomas Traherne that focus on a child's innocent joy and wonder at the world. The Britten Sinfonia's strings are ravishing throughout – relishing Finzi's richly lyrical writing tinged with nostalgia. Mark Padmore's fresh and sensitive delivery of the texts makes this the finest account of this supremely beautiful work that I can recall having encountered,

The quality of the Harmonia Mundi DSD recording matches that of the performances. Engineer Brad Michel has achieved a beautifully open and spacious sound in the Air Studios, Lyndhurst Hall, London capturing just the right amount of ambience in the multi-channel mix. In all three works, the balances achieved between the singer and the excellent players of the Britten Sinfonia are judged to perfection. Harmonia Mundi's presentation is also excellent. The disc is accompanied with a 71-page booklet that provides the texts of all twenty poems (each of which is delightfully illustrated with a picture of their respective poet) in three languages and biographies of the artists.

For devotees of these song cycles this is an essential purchase that can be most warmly recommended.