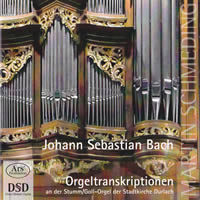 As this disc is all about transcriptions for the organ, let's be clear about the distinction between transcriptions and arrangements. A transcription is a note for note rendition of a musical piece written for one instrument and played on another, sometimes in a different key (transposition). Arrangements are more free with the notes, adding or removing elements, changing tempi and dynamics, sometimes making the music barely recognisable compared to the original. there being, of course, a spectrum between these two extremes.

Johann Sebastian Bach was himself a skilled transcriber and arranger; such operations were stock-in-trade for all worthwhile musicians of his era. Martin Schmeding has collected a fascinating range of organ versions of Bach's music, all of them leaning towards the transcription rather than the extremes of an arranger's art. Some of them are by Bach himself, some of his own music and also including his transcription of another composer's music, namely that of Vivaldi. Others go beyond our present notions of Baroque HIP, and demonstrate how later composer/organists perceived Bach's genius in the Romantic age and beyond.

Schmeding's generous collection of transcriptions (the disc runs for 75'19) is neatly tailored to the organ he selected. It is quite a modest instrument, not well-known, but it is ideal for this programme, which concentrates more on quieter, colourful and transparent delivery, rather than massive power (although there is a very satisfying full organ when required). The organ of the Stadtkirche of Durlach in Central Germany has a long history, spanning three generations of organ-builders. Its magnificent Rococo multi-towered case and associated non-speaking pipes, shown in the booklet photographs, have been preserved, and now hold a 1999 Stumm/Goll organ which also incorporates some registers rescued from the early phases of development. The present organ has a complement of Baroque registers typical of Central German organs, combined with pipework suitable for music of the French symphonic tradition of the late C19th. Its versatility is amply demonstrated here, without any problems of period tunings or ranks of dated or eccentric timbres.

The much-recorded and award-winning Schmeding seems to be in his element here. His playing is exemplary, light of touch, nimble in the few truly virtuosic touches and with buoyant rhythms. Robert Shaab's transcription of the final chorus of the Bach St Matthew Passion ("Lord, in tears we leave thee now") is shorn of its text and becomes a lovely sarabande, played with a lilting touch. A similar dancing rhythm is also applied in Schmeding's playing of Karg-Elert's lullaby-like Pastoral Symphony from the Christmas Oratorio. His rendering of Bach's transcription of a Vivaldi violin concerto positively sparkles with Baroque style, while remaining unmistakably from the Red Priest himself. Schmeding's registrations are as close as possible to string tone.

The final transcription is almost inevitably that of the D minor Solo Violin Partita, a piece of extraordinary genius, part of whose impact is the danger of the violinist coming perilously near bridge-breaking. Busoni immediately comes to mind when one mentions transcriptions of it, and quite recently I listened to more than 20 different pianists playing his seminal transcription for piano. It never fails to impress. However, the now obscure Arne Landman (1887-19666) transcribed it for organ, and Schmeding was right to include this, and to place it last on the disc as a gripping finale. It is by turns sumptuous, brilliant, delicate and lyrical, with Schmeding using all the resources of his organ to bring it to life so splendidly.

Martin Schmeding has written detailed notes on each of the pieces, outlining each composer's transcription techniques (although he modestly doesn't personalise his own charming transcription of a Bach trio sonata (BWV 1031), often played on the flute). The booklet, in German and excellent English, contains a brief history of the organ, a full specification of its registers and plenty of B/W photographs.

As well as providing a "new" context for some of Bach's most delectable tunes, this deeply satisfying programme is beautifully recorded, with the organ presented in sharp focus within the airy space of the Stadtkirche. Sound and performance go hand in hand, so this disc proved quite compelling and hard to keep far away from my player. For sheer entertainment, this disc is heartily recommended.