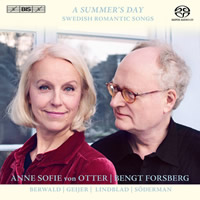 
Brought together by Anne Sofie von Otter, the four composers on this disc lived during the space of less than a century, from the birth of Erik Gustaf Geijer in 1783 to the death of Adolf Fredrik Lindblad in 1878, and thus prepared the ground for the great generation of Swedish song composers, including Stenhammar, Peterson-Berger and Rangström.

The thirty-two songs selected by von Otter and Bengt Forsberg, her piano partner of long standing, provide a broad image of the early development of a Swedish Lied tradition. At one end of the spectrum is the simple grace and tunefulness of Lindblad’s and Geijer’s songs, mainly intended for domestic performance and of a highly lyrical nature, in terms of both music and texts – which were often written by the composers themselves.

Incidentally both Lindblad and Geijer were inspired by the great Swedish soprano Jenny Lind, who performed songs by especially Lindblad at concerts in Sweden and abroad, including Mån tro? Jo, jo! ('Would You Think? Indeed!') and Varning ('Warning') included here.

In comparison, Franz Berwald seems to have been more intent on breaking new ground with his relatively complex songs, attempting to reach an international audience through his settings of German and French texts. He wrote just a handful of songs and most of these are early, pre-dating the symphonies on which his fame rests.

August Söderman, finally, was the youngest of the four, and began his career as a successful theatre musician at an early age. By the time he emerged as a composer in the 1850s, public concerts were becoming more frequent, and at the same time Söderman discovered Wagner’s music – two factors which induced him to search for new forms of musical expression in his songs, with the aim to create a broader narrative with a greater dramatic force.

With her usual gift for characterization, Anne Sofie von Otter brings these largely forgotten miniatures to charming life, with the support of Bengt Forsberg, and, in two duets, the baritone Fredrik Zetterström.

Sweden's long tradition of vocal music has its roots in troubadour music, songs such as the 'air' or folk ballad, festival and celebratory music,and spiced with revised Lutheran psalms. As musical historians have deduced, it is "Swedish-sounding" from the incorporation of folk harmonies, melodies and dance rhythms, often in modal harmonies. There are several handfuls of RBCD compilations of Swedish songs, and amongst the finest of these are those by Swedish mezzo-soprano Sofie von Otter and her pianist Bengt Forsberg.

Surely von Otter needs no lengthy introduction: her stellar international reputation and wide-ranging repertoire in opera and solo song (including "crossover") speaks for itself. In the world of song and lieder, her long-standing partnership with Forsberg brings a potent rapport in performance, which has been remarked upon in their world tours. Inspired programme planning has also been a major feature of their concerts and recordings, and so it is with this SA-CD.

The duo's focus is on the early development of the Swedish Romantic style in song, which was underpinned by the growing affluence and leisure time of the Swedish middle-class. As Eva Öhrström's lucid booklet text informs us, the development of mass-printed sheet music made new songs available as entertainment in many Swedish homes. This demand provided additional income (although not large) to composers.

Von Otter and Forsberg focus on four composers: Adolf Fredrik Lindblad (1801-1878), Erik Gustav Geijer (1783-1847), Franz Adolf Berwald (1746-1863) and August Söderman (1832-1876). Of these, probably only Berwald's name might be familiar to non-Swedish listeners. The 32 selected songs are performed in groups for each composer, except for Lindblad, who has two blocks. While listening, one gradually becomes aware of the differences in style of each composer, their choices of poets and subjects, as well as their responses to their texts. At the same time one is carried away by the quality of the music and the sheer artistry of its performers.

From her first notes in Lindblad's "Afternoon", von Otter's sweetly smiling voice and effortless line is captivating. Her word painting, supported by colourful and expressive accompaniment by Forsberg, brings life to the songs; demure and unpretentious for Lindblad, more complex and overt for Berwald and Söderman's advanced style. Swedish composers very often have a female protagonist in their songs (rather than the German preference for a man); this clearly makes von Otter feel very much at home, as does singing in her native Swedish, which is always beautifully enunciated. Berwald provides songs in German and French, and Söderman in German (having an eye for foreign markets for their work), but von Otter of course takes these other languages in her stride. Not for a moment does this language-switching faze her well-known ability for characterisation - and for a subtle and charming wit.

As a delightful contrast, the programme includes two duets by Lindblad, for which baritone Frederik Zetterström's resonant voice joins with the mezzo's. I was particularly taken by "In Old Age", to a text by Lindblad himself, where an elderly couple look back on their life. Von Otter subtly ages her voice, while Zetterström's remains robust. This is an unusual, very touching, love song, and the two voices join together at the end to repeat the stanza about the success of their children.

There are many jewels in this beautifully crafted programme, as the artists are persuasive and sympathetic advocates for this now almost forgotten genre, never inflating either music or story content. For me, this is a very special disc, not just for a remarkable performance, but for the breathtakingly natural and perfectly balanced sound. Here is solid evidence for the use of multichannel mode for solo song, as von Otter intuitively uses the lovely reverberation of the former Academy of Music's concert room in Stockholm as part of her voice production. (For those who must have the recording parameters, now stated by BIS, the capture was at 88.2kHz/24bit.)