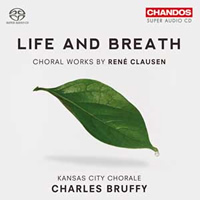 Rene Clausen: All that hath life and breath, praise ye the Lord, O magnum mysterium, The Tyger, The Lamb, Mass for Double Choir, Magnificat, Prayer, O vos omnes, Set me as a seal


Although he writes in all genres, René Clausen is today one of America’s most popular choral composers, and for more than twenty-five years he has been the conductor of the internationally acclaimed Concordia Choir of Concordia College in Moorhead, Minnesota. On this release, several of his choral works are performed by the Kansas City Chorale, another choir of great international renown, whose recording, with the Phoenix Chorale, of Grechaninov’s Passion Week scooped a Grammy® award in 2008, in the category Best Classical Recording, Engineering. ‘Set me as a seal’ is arguably the composer’s best-known work, long popular at weddings, funerals, and in the concert repertoire. Clausen has described the work as ‘various kinds of discussions between God and humans, both from the human aspect and from the God aspect, so a lot of variations… of love, of disappointment, of anxiety, of doubt’.

The composer was moved to learn that the work was chosen for the memorial service held after ValuJet 592 crashed in the Everglades in 1996. All that hath life and breath, praise ye the Lord is one of Clausen’s earliest works, a favourite of choirs across the world. It was one of only three choral works performed in the 2008 Presidential Office Year-End Concert of Compassion held by the Republic of China (Taiwan), with the theme ‘Music brings warmth – Songs spread feeling’. The Mass for Double Choir was commissioned by the Kansas City and Phoenix Chorales. The composer, who had never written a mass before, looked on it as an ‘interesting challenge’. In the work emotions ebb and flow kaleidoscopically, taking the listener from the strength of the unison writing at the opening, to the sorrowful falling lines of the Crucifixion of Christ and the bubbling, dancing figures for the Resurrection. Expressions of praise spill forward atop one another in the Sanctus, a choir of angels too exuberant to be contained. In contrast, Prayer sets Mother Teresa’s gentle words with long arching phrases and gentle dissonances.

René Clausen (b. 1953) is presently best known as one of America's most popular composers of choral music, even though his output covers most musical genres. For more than twenty-five years, he has directed the Concordia College Choir in Minnesota, an internationally renowned body. As well as composing, he is a fine and devoted teacher, dedicated to spreading the joy of self-expression through music to the public.

Clausen is a self-confessed Neo-Romantic, although that term is becoming poorly-defined and now embraces a wide variety of approaches. He found his musical voice early, and has since been very consistent in his approach (some might say too consistent). Harmonically eclectic but basically tonal, he also uses tone clusters, fashionable for writers of choral music for some time. This involves harmonies with shimmering dissonances produced by two or more notes immediately adjacent on the scale. Despite any such harmonic complexities, his music usually finds its way home and resolves itself in the tonic key, and his choral writing, while deeply expressive, is not too challenging technically, so that amateur choral societies can master it.

This is very much the sort of music excelled in by the Kansas City Chorale (a world renowned twenty-four strong choir of mixed voices provided by local professionals). Their conductor, Charles Bruffy (b.1958), has been the choir's Artistic Director since 1988, and is renowned for his fostering of new music by commissioning works for the Chorale. Under his direction, the choir has gained a reputation for the unity and beauty of their sonority, amply displayed here, as well as on Chandos' other discs by the Chorale.

The a cappella programme of 'Life and Breath' is essentially a sacred one, including the texts of 'Tyger, Tyger' and 'The Lamb' by William Blake which are full of Christian metaphors. Clausen's standard motets such as 'O magnum mysterium' (2008), 'Magnificat' (1988) and 'O vos omnes' (1986) display his consistency and sincere expressiveness, as well as an ability to provide some elements of freshness in the face of so many settings by others. He tends to use soloists more often than many of this peer group, which makes for varied texture and gives us a chance to hear, in particular, the sweet-voiced Sara Tannehill. 'Prayer' (2009) is probably Clausen's most popular piece, a moving setting of Mother Teresa's text, whose stoic sympathy and aid for the poorest is expressed, poignant because we now know what an agonising internal struggle she suffered.

The longest and most challenging work for the choir, 'Mass for Double Choir' (2011) is at the heart of this album. A challenge too for Clausen, to accept this commission from Bruffy's Kansas City and Phoenix Chorales. It brings more variety in pace and dynamics, as well as presenting difficulties of consistency of tone and ensemble between the two SATB choirs. It works well here, with Bruffy bringing out the maximum drama from such long texts as the Gloria and Credo. There are, too, some ravishing moments of gentle tranquillity, as in the the final Agnus dei, where the chorale's depth of tone seems to grow even stronger at low volumes.

As usual, the Chandos team provide a lovely recording, with the choir's rich sonorities sustained by an ideal church acoustic, and the locations of the voices are focussed perfectly by the 5.0 multi track. All texts are given in English, German and French, and the booklet has all the required information in a neat and clean layout.

It has been a great pleasure to hear this programme of Clausen, ranging as it does across much of his choral writing career, sung with such obvious affection, limpid tone and musical discipline. A self-recommending issue, for sure!