I find this release is a missed opportunity. Although there are some other, smaller works on this disc, it's primarily a re-release of Saint-Saëns's Organ Symphony. However, ... 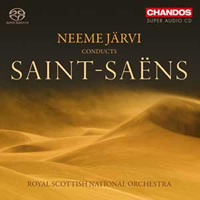 
The works on this disc all date from the first half of the composing life of Saint-Saëns – with one exception, the Marche du couronnement, which he wrote for the coronation of Edward VII in 1902. In Spartacus, the composer depicts Alphonse Pagès’s tragedy on the revolt headed by the ill-fated gladiator in 73 BC by use of bold, chromatic notes, followed by a military allegro which integrates them. After a tender theme, the bold notes return, now with a downward turn at the end, probably evoking Spartacus’s defeat, and the concert overture ends with a march that recalls the tender theme.

Equally dramatic is Saint-Saëns’s symphonic poem Phaëton. In ancient Greek myths, Phaëton, the son of Helios, is reluctantly given permission to drive his father’s sun chariot. As Phaëton fails to control the chariot, and carries the sun too close to the earth, Zeus intervenes and brings the unfortunate ride – and Phaëton himself – to an abrupt end by means of a thunderbolt. Saint-Saëns’s writing for large orchestra (including contra-bassoon, tuba, two harps, and three timpanists) brings with it a pure, raw energy. The intense state of panic is signalled by a menacing low note on the trombone, and further heightened through subsequent imitative entries that crowd in on one another. After Zeus’s massive thunderbolt, the music subsides into a feeling of loss and regret. Saint-Saëns’s other three symphonic poems are also on this disc – Le Rouet d’Omphale, Danse macabre, and La Jeunesse d’Hercule – as well as the ‘Danse bacchanale’ from Samson et Dalila and the ‘Marche militaire française’ from Suite algérienne.

The Royal Scottish National Orchestra and Neeme Järvi, their indefatigable Conductor Laureate, continue their fruitful relationship for Chandos with a generously filled SACD (77' 40”) of familiar and unfamiliar orchestral works by Saint-Saëns. Those who enjoyed the recent survey of the composer's ballet music on Melba Elan, Ballet Music from Operas by Saint-Saëns - Tourniaire will find this new disc very much to their taste.

The centre pieces of this collection are the four symphonic poems that Saint-Saëns composed between 1872 and 1877 - performed on this SACD in the order of their composition. Of these only 'Le Rouet d'Omphale' and 'Danse macabre' could be regarded as at all familiar to modern audiences, but regrettably rarely appear on concert programmes today. Järvi and his orchestra lavish great care on each of these fastidiously crafted pieces. The playing in 'Le Rouet d'Omphale' has a pleasing Gallic delicacy and elegance, while Järvi builds 'Phaeton' excitingly to the climactic moment when Zeus hurls his thunderbolt – captured here with splendid impact by the vivid recording. 'Danse macabre' has terrific drive and benefits from the feisty violin solos of the RSNO's leader Maya Iwabuchi. The fourth and final one of these symphonic poems, 'La Jeunesse d'Hercule', is also the longest and most ambitious. Perhaps its subject – the choice for Hercules between the paths of pleasure and virtue – is not quite as suited to musical depiction as the other less philosophically based symphonic poems, but Saint-Saëns manages to compile a beguiling piece of varied charms and one that allows appreciation of some ravishing playing from the RSNO strings.

The disc opens with a thrillingly frenetic account of the 'Danse bacchanale' from the third Act of Saint-Saëns' opera 'Samson et Dalila' in which Järvi and the players of the RSNO revel in both the music's oriental barbarism as well as its sensuality. Spirited performances of the well-known 'Marche militaire française' and the delicious overture to the composer's light opera 'La Princesse jaune' follow before we reach the three rarities that complete the programme.

Saint-Saëns described 'Une nuit a Lisbonne' as 'a little barcarolle'. It was composed in 1880 and dedicated to King Luiz of Portugal. Scored for small orchestra and lasting under four minutes it is a captivating miniature, especially when played as affectionately as here.

The Concert Overture 'Spartacus' dates from 1863 though the composer never published it and it languished forgotten until the 1990s. It is a fiery work with a flavour of one of Liszt's more flamboyant symphonic poems – just the sort of piece that brings out the best in Järvi's conducting style. The same is true of the final work on the disc - the 'Marche du couronnement'.This splendid march, written for the coronation of Edward VII in 1902, is given a terrific performance full of swagger, appropriate Edwardian pomp and crowned with clangorous tubular bells.

The 24-bit/96 kHz 5.0 channel surround sound recording matches the high standard set on a number of recent Chandos recordings made in the ample acoustic of the Royal Concert Hall, Glasgow. It delivers a convincing orchestral image, one that also graphically conveys the acoustic signature of the recording venue. Very detailed and informative liner notes by Roger Nichols are also most welcome.

The Royal Scottish National Orchestra really do a fantastic French sound these days, arguably one of the finest outside of the country itself. So it is with great pleasure that one listens repeatedly to this disc from them under Neeme Jarvi of Saint-Seans. Most of the favourite (purely) orchestral works are included - the obvious exception being the 3rd (Organ) symphony. Opening the disc is Danse bacchanale which has a very sultry mood, even if it doesn't efface memories of other accounts from (say) Barenboim.

Le Rouet d'Omphale is next and it is fair to say that Jarvi comes close to out-Beechaming Beecham! Wonderfully delicate and pointed phrasing that is a joy from start to finish. Phaeton is less familiar in the studio (and virtually never heard on the platform) but receives sterling advocacy here with Jarvi and the RSNO never resorting to bombast. Danse macabre follows and - mercifully - the solo violinist (Maya Iwabuchi - leader of the RSNO) is not spotlight. Why is that important? Well Iwabuchi's contributions frequently colour other sections, lending them an intentionally grotesque hue the effect of which is completely if the soloist is too prominently balanced. Once again, the RSNO eschew vulgarity yet still play with vigour under Jarvi's baton. After the familiar, a welcome foray into Saint-Seans' seldom heard repertoire once more; this time it's La Jeunesse d'Hercule (the most substantial work on this disc) which contains many felicitous moments and the strings get to shine with some silky playing in the introduction. The woodwind fluttering and imposing brass are scarcely less impressive. Marche militaire francaise is given an astoundingly rousing performance that is demonstration stuff in every respect.

The temperature needed cooling after that and wisely the Overture to La Princesse jaune is next - written for a light opera, this performance is full of fizz that wouldn't be out of place in Offenbach - wonderful! Written for a much smaller orchestra, Saint-Seans described Une nuit a Lisbonne as "a little barcarolle" and the RSNO play with no small amount delicacy. The next largest piece follows (Spartacus) and is a much bigger affair all-round. Fortunately the style and swagger of the RSNO's playing found in the other pieces again distinguish this disc and once again, it brings a broad smile to the listeners lips. Concluding with Marche du couronnement, the playing is grand without ever straying into bombast.

The sound is fantastic, straight out of the top drawer. If you turn the volume to "family & neighbours have gone out", the realism is incredible. 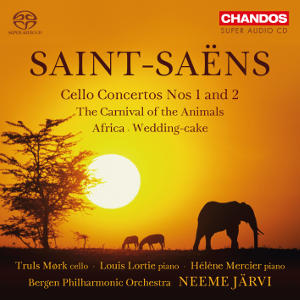