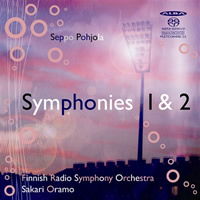 Finnish composer Seppo Pohjola (b. 1965) comes from a family of three musical brothers, and is the youngest but only surviving sibling. Olli, the oldest, was a renowned flautist and member of the Avanti! Chamber Orchestra, Matti was a cellist in the same orchestra. Seppo's own instrument was the French horn, and he was the only brother to take up composition seriously, beginning at an early age. Father Erkii raised the Tapiola Choir to the highest international standards.

Seppo Pohjula is deeply aware, as a modern symphonist, that he is part of a historical continuum, and takes this responsibility very seriously. He compares the urge to write a new symphony every four years as a kind of intellectual Olympics in which he partakes. Symphony No. 3 was finished in 2011, Symphony No. 2 in 2006, and the first Symphony in 2002. For Seppo, the weight of tradition embodied in the word "symphony" is daunting. He reports that he approaches it trembling with respect and hat in hand, but sometimes he feels he just needs to take the bull by the horns.

It is very difficult to define Seppo Pohjulas musical style in generalised terms; he has developed a very personal modus operandi. Certainly rooted in late Sibelius' organic growth of motifs, he doesn't pursue any particular school or technique, but harvests and sows in the tradition of Scandinavian symphonic growth. His admitted musical hero is Ravel, and he pursues Ravel's inspiration in music which is broadly tonal, taking joy in devising new orchestral colours and combinations. Structurally, he is not greatly attracted by the age-old sonata format of statement, development, recapitulation; rather his approach is sectional, sequencing blocks which contain a particular mosaic of motifs, textures, orchestral colours and rhythmic pattern resources to his will in a fairly abstract but still emotional way. He does, so far, stick to the overall four movement structure of the classical symphony, and keeps timing down to about 40 minutes per symphony; there are no Mahlerian Universes to traverse for his listeners.

The devastating loss of his two brothers brought Seppo Pohjula to writing his Symphony No. 1 and dedicating it to their memory. Embedded are quotations from Beethoven's "An die Freude" (Ode to Joy) which appears on the French horn in a very unfamiliar context, two quotes from Wagner and one from Tchaikovsky. The quotations are well secreted, and probably only tyros will spot them; their meaning is for the composer himself. Opening the symphony is an infinitely soft web of sound, underpinned by the faint tread of deep basses, a picture of desolation and despair; the hushed playing of the FRSO is superbly controlled and richly toned here, and this passage, returned to several times, is a test of the ambient noise level in your listening room. After several other eerie episodes involving dark trills in the clarinet's chalumeau register, the music suddenly flashes into a bitter, violent parody of Stravinsky's Rite of Spring, complete with jagged polyrhythms in a perverted, exhausting dance. Passages of bitter irony then enter, built from what booklet writer Jouni Kaipainen aptly calls "Shostakovian Lego pieces".

The second movement also begins with the barest threads of sound, an insect-like buzzing, giving a sense of timeless distance, not unlike Bartók's Hungarian plains at night. A touchingly beautiful passage, floating solo oboe then bassoon's melodic evocation of sorrowful love over dense, hushed string harmonies; then a passage quite Ravelian from "Daphne and Chloe", in which the French horn takes up the lonely melody. Oramo and the orchestra play with ravishing tone and deep expression here. Moveing transitionally into the Third movement, flutes and oboes swap bird songs which become progressively more complex and acrimonious, before the "Shostakovian Lego blocks" create an ironic dance in canon, speeding up to a vigorous scherzo. Movement four is vivid, excitable, the orchestra throwing off sparks like a whizzing Catherine Wheel with only brief respite before the heavy brass lead the way into a final triumphant chord.

Symphony 2 is notably more modernistic but still has Pohjula's fingerprints all over it, particularly in the presence of magically hushed textures, bird calls which begin sweetly and rapidly become acrid, and Ravelian atmospheres of misty distance. Here too is the moto perpetuo on strings of Sibelius and Tapiola-type storms. The Rite of Spring-like polyrhymic dances also recur in the second and fourth movements. The composer delights in inventing new, ear-tickling orchestral colours and layered textures, including an elaborate accompanied piano cadenza, and a sentimental, sumptuous concoction of celesta, harps, bells and sweeping strings. In general, the full orchestral sound is sparingly used, rather like Mahler's chamber-like orchestration of his Ninth and Lied von der Erde, and effectively this symphony could have been called a Concerto for Orchestra. At the end, G major dominates and the whole orchestra come together in celebration.

The combination of Oramo and the Finnish Radio Symphony Orchestra is a potent one; he has a deep understanding of Pohjula's music and the FRSO are a first-class, fully international orchestra. Alba's engineering is also impeccable; I have heard Oramo and the FRSO in concert several times, and their characteristic virtuosity and warm, transparent sound is beautifully captured, especially in the multichannel mode, which transports the listener to the Helsinki concert hall with depth and quite wide perspective, every instrumental position clearly focussed.