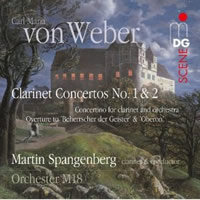 
Impressive Demonstration
Rübezahl storms wildly through the Riesengebirge, and the elves in Oberon’s retinue scurry like the wind. At the height of the romantic era Carl Maria von Weber composed musical pictures of suggestive power. He produced emotional suspense of the highest concentration not only in his opera overtures but also in the purely instrumental music of his clarinet concertos – as Martin Spangenberg impressively demonstrates to the ear in his debut with the Orchestra M 18. And this in the 3D sound of 2+2+2 recording technique – a virtuosic sound feast for the senses!

Atmospheric Imagination
Already at the beginning of Weber’s first Clarinet Concerto a fairy-tale atmosphere spreads out. In a gloomy F minor the cellos present their mysterious theme over repeating eighth notes in the strings to a commentary in bold trills by the second (!) violins, and then the energy that has built up is unleashed in a mighty fortissimo beat by the whole orchestra. In the second movement the solo clarinet forms a quartet in the best of moods with three muted horns. Take a bow to the horn section of M 18, whose members rise to this challenge and master it with bravura!

Operatic Fascination
The Concertino represents a miniature opera with an overture, narrating recitatives, and glamourous arias. The imaginative power of the listener is richly fueled; even if no “programme” can be discovered behind the notes, a fascinating story arises directly in the receptive imagination – pure romanticism!

Magnificent Interpretation
Thanks to playing technique of the highest order, paired with a sensitive feel for the emotional moments and his eloquent playing style, Martin Spangenberg is able to remove Weber’s clarinet concertos from the cabinet of virtuoso victuals and to reveal the genuine delicacy of this music. Not least his meticulous consideration of the tempos indicated by the composer, which frequently (we are surprised to say) have been selected only reluctantly, enables completely new aspects of this magnificent

In theory, the results could have been excellent for Martin Spangenberg is former principal clarinet with the Munich PO and has performed concertos under Levine & Celibidache among others. The orchestra are "all active or former members of the Gustav Mahler, EU YO's or Junge Deutsche Philharmonie" - the first two in particular have many illustrious graduates (forming the COE, GMCO amongst others and filling positions in just about every world class orchestra going today). Sadly, this potential is not realised here - it is not Spangenberg's playing. His playing is everything one could wish for - sensitive, thrilling and above all, musical. Where does it go wrong? Well the conducting in the overtures is very soggy in comparison to the experience we get both here (Weber: Overtures - Kantorow) and here (Weber: Overtures - Kuhn) and remarkably tolerant of intonation problems that oddly don't appear elsewhere in the programme. The concerto performances are somewhat better played but the rapport that is so clearly demonstrated on Weber: 2 Clarinet Concertos, Clarinet Quintet - Fröst, Kantorow between soloist, conductor and orchestra is sorely missed here. The sound is good but cannot redeem the disc to anyone except a relative or friend of a contributor.