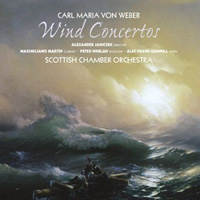 The ‘Clarinet Concerto No. 1 in F minor' and ‘Concertino for Clarinet & Orchestra in C minor / E-flat Major' were composed at a pivotal time in the instrument's development. A new style of playing which was soft, full and rich in tone inspired several composers to write for the instrument, whilst inspiring Weber to write what would become one of the cornerstone's of the clarinet repertoire. Clarinettist Maximiliano Martín was praised for his performance of Weber on 2009's Vibraciones del Alma with The Herald admiring his ‘liquid virtuosity, which flows like oil'.

Weber's background as an opera composer is apparent in the entertaining and theatrical ‘Bassoon Concerto in F Major'. As Peter Whelan commented: ‘It's terrific fun to play because Weber writes for the bassoon as though it were a tenor in an opera - so you get to play lots of different characters...from jilted lover to comic clown'. For this performance Peter has reconstructed a version of the 1822 score rather than employing the commonly used 1865 version.

With a preponderance of chromatic pitches and the requirement of multiphonic chords, the virtuosic ‘Horn Concertino in E minor' is widely-regarded as an extremely demanding work for soloists. Alec Frank-Gemmill commented: ‘Weber's clever combination of tunefulness with crazy special effects is a winner and was also unprecedented at the time'. In a unique twist Alec combines these interesting features with memories of melodies heard earlier in the piece to perform his own version of the cadenza.

A wonderful disc handicapped only by a slightly odd choice of repertoire.

The soloists here (Maximiliano Martin - clarinet, Peter Whelan - bassoon, Alec Frank-Gemmill - horn) are all principals of the Scottish Chamber Orchestra and show-off in concerto form their talents (as opposed the many symphonic wonders they have presented over the years). In terms of conception the clarinet concerto no. 1 & the concertino for clarinet & orchestra are given readings that are closer to Weber: 2 Clarinet Concertos, Clarinet Quintet - Fröst, Kantorow than Weber: 2 Clarinet Concertos, Concertino - Steffens, Szulc in both scale and conception. However, as those familiar with their stunning Mozart discs will testify, the SCO is very well trained in HIP matters and they bring their knowledge to bear here with rewarding results. Martin is just as fleet-of-foot as Martin Frost and preference will most likely come down to the slightly more graceful response of the SCO to Aexander Janizcek's direction (also bearing in mind that this disc disappointingly doesn't present the 2nd clarinet concerto in preference to the concertino).

Next up is the bassoon concerto which currently has only one alternative offering on SACD (Weber: The Symphonies - Kantorow). Both these accounts are beyond reproach and again, leaving repertoire aside, ones preferences are probably determined by whether the more forthright approach of Kantorow better fits ones conception of Weber's music - both are delightful to listen to and one personally would not want to be without either! The horn concertino is the version in the SACD catalogue (there are fewer than 10 on RBCD at the time of writing!) so it will quite possibly be unfamiliar to many listeners. Like the clarinet concertino, the horn concertino is structured slow-faster-fast (in this case, the finale is a polacca). The first two movements allow Frank-Gemmill to display his lyrical ability to great effect; it is almost impossible to detect (outside rests) where he chooses to breathe! The middle of the central andante con moto has many bravura passages which are played with disarming, thrilling ease and the cadenza in which (I think) he sings down the horn to get a chord from it is astonishing! The finale "merely" caps the work with a display of self-effacing virtuoso playing that is just smile-inducing.

Sonically, this is another gem from Linn. The one aspect that may concern some listeners is that occasionally during the bassoon concerto, there is a certain amount of key noise from Whelan's instrument compared to the BIS account but nothing much to get worked up about! Otherwise, the soloists are presented honestly and the details of the orchestration are easily heard whilst retaining a cohesive and coherent whole.

If the repertoire suits, this is enthusiastically recommended.