Of all the JC albums out there MoFi pick this one first? Back in the day an album comprised of some re-recorded Sun tracks (In stereo! was the hook) with some additional new ... 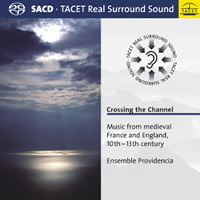 This disc of chant is hypnotic musically and stunning sonically - one of those times where Tacet just push the boundaries of multi-channel presentation to the benefit of the music.

As the absolutely first-rate notes from the Ensemble Providencia's sopranos (Maria Andrea Parias & Sarah Richards) explain, this is a varied collection of the different styles of chant & song that were present on either side of the English Channel in C10-C12. The manuscripts have come from a large number of locations: Bodleian Library (Oxford), Faculte de Medecine (Montpellier), Corpus Christi (Cambridge), Worcester Cathedral, Bibliotheque Municipale (Arras), British Library (London), Herzog August Bibliothek (Wolfenbuttel), Staatsbibliothek (Bamberg), Corpus Christi (Oxford). Despite some of the German locations of the scores, these are works of the (then) Norman empire. What is nice about the construction of the disc musically is the various styles are spread about, making for a nice variety of sonorities as the disc progresses. The sonorities are ably abetted by Ensemble Providencia (also mezzo's Stephanie Leclercq & Hanna Jarvelainen) whose purity of tone is amply varied to expressive effect.

The extraordinary sound though is something to marvel at for this release is another of their "Tacet Real Surround Sound" recordings. Over the course of the disc we are treated to many varieties of placing of Ensemble Providencia; some in front, some to just one side, one diagonal but most extraordinary of all are the tracks "Christus resurgens" & "Bien deust chanter" where members process around the listener (presumably not in shoes!) Quite apart from that aspect, the "pure" sonic considerations are also very well done with the acoustic of Abbatiale (Beaulieu-sur-Dordogne) happily flattering the Ensemble's sound.