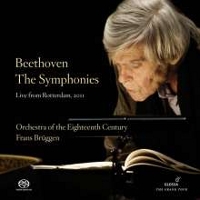 Right from the opening introduction, it is obvious that this is a very spacious reading of Beethoven's first symphony. Only Karajan takes a more leisurely approach to the “Adagio molto” yet he more than makes up for this in the ensuing “Allegro con brio”. By contrast, Bruggen's is decidedly devoid of “brio” and is the slowest by far of all (including his own earlier account on Philips); so much so that if one didn't know better you might think that (say) Klemperer had been resurrected and placed in front of a period instrument orchestra! The “Andante cantabile” fares better and sees Bruggen broadly in consensus with everyone except Haitink (who is a whole minute faster than Bruggen II) and Jarvi (who is a further half a minute faster again). The Scherzo is likewise accorded the tempo “Allegro molto e vivace” - for those that this matters, the repeats are not observed after the Trio section. In the Finale, Bruggen once again is slowest of all despite having one of the quicker introductions and shaving nearly 20s from his first account. What is going on here?

In both the first and second movements, Bruggen is slow – very slow. By comparison to Jarvi (the quickest) he takes 2 & 1½ minutes longer respectively. The next nearest is Haitink yet the LSO are encouraged to play with a conviction and style that is almost entirely lacking here. It is noteworthy too that Bruggen's earlier account of both movements would have sat right in the middle of our modern consensus – a sad detoriation of revolutionary spirit seems to have occurred over the intervening years. Fortunately, tempo choices pick up for the third and fourth movements but the stylistic concerns remain.

The very opening gives a clue as to why this set is so lacklustre in vitality and the crucial revolutionary fire that glow from every note of these works. The reverberation time is astonishingly long – it explains why the details one would normally expect from such artists as these are not audible and also why some tempos are very slow by todays standards. Indeed, Bruggen is slower than all by a huge margin –it is almost as though he was fed a sedative before mounting the podium for this movement. The second movement fortunately is more successful and the restrained articulation of accents and dynamic contrasts lends a noble air to the movement. Given the acoustic challenges, the Scherzo is naturally on the slow side and one must marvel at the articulation the horns must have given to produce such clarity in their solos – the overall effect though is muted, especially when placed next to any of the listed alternatives (most especially Bruggen's own earlier account). The Finale unfortunately suffers from a very slow tempo in the “Allegro molto” with all the listed SACD alternatives managing to take at least 1 minute from his tempo. The speed in itself is not the problem; Haitink's & Karajan's grip of the structure in the first movement, together with superb playing and commitment from their players, prevent their relatively spacious accounts from sagging; here though, that grasp of the material is sadly absent to this listener.

Bruggen conducts a daringly slow introduction which almost but never quite fails to lose the concentration of the listener. He then turns in a remarkably spirited account of the remainder of the first movement – as though he has forgotten about the acoustic troubles that necessitated much more measured approaches elsewhere. The “Adagio” is also well turned out and one can hear some nicely mannered playing from the Orchestra of the 18th Century. The Scherzo is thrilling and despite the extra challenges of playing on period instruments, the playing and tempo is well up with the best of modern instrument accounts. Similar considerations apply to the Finale and this is by far the most successful work in this set.

Arguably the most famous symphony ever written, this work has so much emotional baggage (from it's use in WW2 by all sides) and countless interpretations to which people will compare newcomers. Sadly then, it must be noted that there is a glaring wrong note in the Scherzo that surprises on first hearing and grates on every successive listen (and there are other less than felicitous moments along the way). It's a great shame for Bruggen's overall conception of pacing is very convincing but the execution lets it down & all concerned deserved another “take” (even if it meant studio conditions).

Despite the flowing tempo chosen for the first movement, the interpretative choices of Bruggen could hardly be further from HIP if he tried. The overly-exaggerated ritardando's and other rubato here makes even Karajan seem as though he had been channelling Gardiner – quite extraordinary but not in a good way. A similar “Romanticism” infects the “Andante molto moto” with a (by the standards of today) ponderous account – think huge river rather than stream. A similar lethargy seems to have infected the Peasants in the third movement and any jollity felt is forced rather than springing forth naturally. The Storm is well handled and as dramatic as the recording can allow although it does seem to drain Bruggen somewhat so that the conclusion is not as overtly joyful as the best accounts can manage.

Like the second symphony, Bruggen's first two movements are slow. In the first, the rhythms sag to the point of being completely deflated. In the second, the movement transforms into a quasi-funereal march - “Allegretto” it is not. The third movement shows sparks of life and these are carried through to the Finale but the recording obscures so much detail that even Karajan's 1960's performance is more interesting to the ear, never mind the astonishing clarity that is achieved by Vanska & Jarvi.

The inner movements of this “small” symphony are full of life and one can clearly tell that the players and Bruggen are enjoying themselves. That is all the more incredible when the outer movements are given some of the most lifeless performances on disc – some (not listed above) may be considerably slower but they have a commitment to their playing and direction that does not come across here (it could well be the recording that robs the detail from the playing though).

Arguably the most groundbreaking of Beethoven's output (almost certainly true for his symphonic works) receives a mixed account here. There is no doubt that Bruggen and his orchestra have some interesting ideas, particularly in the first three movements. The slow movement can only be described as flowing and must rank as one of the quickest acounts on disc; the speed though merely adds to the expressive character for the instrumentalists are not taxed with sustaining notes and melodies beyond Beethoven's phrasing. The other purely instrumental movements are similarly as successful as the recording allows – at no point can one pretend that the details heard come close to any of the modern RBCD comparisons listed. The fourth movement has conventional tempos outside of the cadenzas for the cello & basses where Bruggen's ideas of recitative are as individual as any. For the most part the choral singing and the contributions of Rebecca Nash, Wilke te Brummelstroete & Michael Tews are solid without being exceptional. However the same cannot be said for the opening contributions of Marcel Beekman whose intonation is very wayward. The choral interpolations in Beekman's opening solo are shouted (without a unified pitch) rather than sung and it is not the last occasion that is seriously unimpressive.

As already mentioned, the recording is a serious liability to the enjoyment of the playing and in many places obscures much detail of the playing. Much of that must be the reverberation of the acoustic and some combination of this and the placement of microphones to combat any audience noise – this is done very successfully & one can hardly believe there is an audience present.

Altogether disappointing and not recommendable – a great shame that this was the first period instrument Beethoven symphony cycle; I hope it is not the last on SACD and I hope that Frans Bruggen will not be remembered for these recordings for they undermine the great work he did earlier in his career. Listeners will be far better served by wonderful accounts from Paavo Jarvi (chamber orchestra-sized, ultra-HIP), Osmo Vanska (symphony orchestra-sized, mainstream-HIP) or Bernard Haitink (symphony orchestra-sized, minimal HIP) according to preference of performing style (sonically there is little between Jarvi & Vanska; Haitink's LSO account sounds all too much like the Barbican for some!) 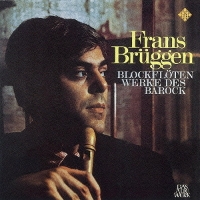 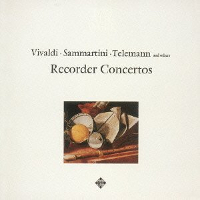