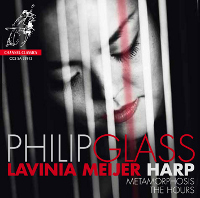 Glass: Metamorphosis 1 - 5, Selection from The Hours, The Poet Acts, Something She has to Do, I'm Going to Make a Cake, An unwelcome Friend, Choosing life, The Hours


My first encounter with Philip Glass in 2011 was truly one of those once-in-a-lifetime opportunities. As a harpist I feel greatly privileged to have such new experiences – not only on stage, but also behind the scenes. Collaboration with composers is an important aspect of this, and new ideas not infrequently arise through personal encounters and mutual inspiration. This was certainly the case when I met Phil, who had never before heard his Metamorphosis live on the harp. After my initial nervosity, tension soon melted away when I played the opening bars and he remarked “that sounds beautiful!”.

After this special encounter, I looked into other pieces by Glass that could be played on the harp. I had heard him play the Opening Piece from ‘Glassworks’ himself, a very beautiful piece in its seemingly unending interchange between the two hands. The film music for The Hours was a more tricky challenge. After examining the original score and the piano version I came to the conclusion that not all the movements could be arranged for the harp. But I managed to adapt six of the eleven numbers, working them out with the sound of the orchestral version in mind. I hope this CD will add an extra dimension to the performance practice of Glass’s most frequently performed works.

Phillip Glass (b. 1937), together with other American musicians such as Steve Reich, Terry Riley and La Monte Young began in the '60s to develop a new style of classical music which has diversified and become very influential. Named "minimalism" (a term which Glass dislikes), it is tonal, centred on consonant harmonies rather than dissonance, has a steady pulse or is immobile, uses repetitive melodic cells, figures or motifs which are simple in structure, and these often gradually change within or between compositions. Glass himself has become one of the most complexly diverse of minimalists, with more than 20 operas, 9 symphonies, 2 piano concertos, various other concertos, film sound tracks, string quartets, and many pieces for piano as well as organ.

Harpist Lavinia Meijer has devised her Glass programme for solo harp, making her own transcriptions from original piano or piano versions of the original instrumental scores. The programme begins appropriately with the 'Opening Piece' from Glassworks (1981), a 6-piece suite for piano and chamber group for Glassworks, Glass' debut record for CBS. This is a good introduction to the style of Glass' music. Written for the piano and thus relatively easy to transcribe for harp, It has all the features of the composer's music; repeated rhythmic cells based on arpeggios in the left hand are the basis for a chordal or octave melodic cell in the right. These melodic cells may be one-in -a-bar or form more complex rhythms with the ostinato accompaniment such as 2 against 3 or syncopation. Despite the near lack of dynamics or other forms of contrast, the result is surprisingly emotional; lyricism with grace and atmosphere. There are no standard modulations from key to key, just gradual shifts in harmony which have a similar effect, generating tension or relaxation.

'Metamorphosis' (1988-9) was composed as a personal illustration of Franz Kafka’s 1915 novel of the same name. There are 5 sections, each of which displays somewhat different combinations or blendings of the rhythmic and melodic elements arrayed in Metamorphosis I, and the developments are continuous, so that mostly the next section carries on from the end of the previous one. Although Metamorphosis is simple, it is haunting, stirring, and emotive. By blending elements of Glass' minimal ideals outlined above, an progressively changing suite develops. The harp offers a wider range of tonal colour than the original piano; for example, a bass octave 'chime' which occurs frequently in each section is darkly sumptuous and full of overtones. The octave chime, melody or arpeggio cell when played instead up in the high treble has a brilliant, gleaming tone which is exciting and beautiful. After several hearings, one can be convinced that there is an overall flow of progress in the work, with the central movement the fastest and brightest, reverting to the more solemn, darker Metamorphosis V at the end. A timeless piece which becomes more lucid and meaningful with each playing.

'The Hours' (2002) is from the score for a film which is the story of three women searching for more potent, meaningful lives. Based on Michael Cunningham's 1999 Pulitzer Prize winning novel, the film interweaves the stories of three women - a book editor in New York, a young mother in California and author Virginia Woolf. Their stories intertwine, and finally come together in a transcendent moment of shared recognition. Glass' score calls for orchestra with harp, string quartet, and piano, but there is a piano reduction by Riesman & Muhly which Meijer used for her transcription - only 6 of the 11 original numbers.

Looking at the track list, you will see that each piece is headed with a typically trite Studio caption such as 'Something She Has to Do' and 'I'm Going to Make a Cake'. If you rush to listen to how music instructs us in bakery, don't bother. Minimalism is just as useless as standard classical music in depicting such things. These beautifully crafted minimalist pieces, however, can carry emotions quite well. 'Choosing Life', for example, is the loudest and most dynamic of the suite, and melodically is very passionate, with brilliant sprays of descant arpeggios in the harp's upper region and a surging melodic line in the tenor region.

Lavinia Meijer is not taxed with technical virtuosity in this programme; only in devising fingering and foot-work for key changes and accidental notes. Interpretation of the simple scoring is the trick. She ably demonstrates consummate musicianship with her warm and compelling playing of these works, sifting the beautiful melodies and presenting them for our delectation. And this despite the potentially fatiguing repetition, sparseness of notation and lack of instructions in the score. She writes in the booklet of her fascination for Glass' music and about how much she valued playing for him and discussing his work. In fact, Lavinia Meijer is such a good ambassador for the composer that this recording may captivate many listeners put off by a misunderstanding of Glass's form of minimalism. Perhaps some will be motivated to explore the Phillip Glass repertoire further.

Technically, we are graced with a gloriously realistic recording of the harp. No pedal-board noises intrude and the instrument sits, almost tangibly, just behind your speakers in an unobtrusive church acoustic. The 5.0 multichannel track gains by the extra speakers adding even more overtones from the plucked strings, so the resonances of the soundboard can be heard decaying until the player stops the strings vibrating with her hands. All this adds to the bloom and lifelike image of the harp and harpist.

A stimulating and enjoyable programme, given a truly committed performance and recorded with immaculate fidelity. What more could you want?

In my opinion, a wonderful disc even for those unfamiliar with Glass or harp.