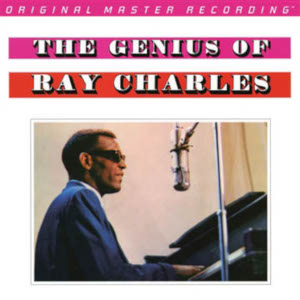 "The Genius of Ray Charles"

Let the good times roll, indeed. Taking the message of the first song on this thoroughly legendary 12-song set to heart, Ray Charles lives up to the album’s title and more, in the process completing one of the most focused, cohesive, and expertly played classic R&B albums ever recorded. It’s not for nothing that Rolling Stone ranked it #263 on the magazine’s list of the 500 Greatest Albums of All Time. Having languished with passable albeit insufficient sonics for too long, Mobile Fidelity has given it the treatment it’s always deserved.

Divided into two sides, The Genius of Ray Charles finds the pianist/singer paired with tenor saxophonist and longtime foil David “Fathead” Newman, Charles’ band, and a few members from Count Basie and Duke Ellington’s ensembles. Arranger Quincy Jones does the chart honors, revving up the big bands and seizing their energetic prowess while Charles outshines everyone in the all-star cast. Exuberant, joyous, stylish, and, in a word, the epitome of soulful, the brassy music is belted out with unfettered emotion and honesty, crossing boundaries and rolling the blues, gospel, and jazz into a pure-voiced hybrid.

On the record’s second half, ballads take over. Charles teams up with arranger Ralph Burns and a sizeable string orchestra, delivering standards such as “Don’t Let the Sun Catch You Cryin’” and “Am I Blue” with an equal balance of intensity, feeling, and sympathetic originality. Yet the record’s single-greatest performance--and, quite possibly, the definitive performance of Charles’ career--belongs to “Come Rain or Come Shine.” It’s here that Charles, free of the piano and big band, comes into his own as a singer, becomes the singular artist that, in just a few years, would turn country music on its head. The brilliance goes beyond words.

Alas, The Genius of Ray Charles has never been celebrated for its sound. Instances of overmodulation clouded crescendos and the music never popped with requisite life. A 2005 Atlantic remaster from Europe didn’t solve the problems, and also sucked the warmth and dynamics out of many of the songs. Mobile Fidelity is honored to have finally resolved the deficiencies and, on this head-turning hybrid SACD, present Charles, Newman, and an iconic batch of arrangers, producers, and musicians in scintillating mono sound.

This SACD is disappointing - I had high hopes when I ordered it, because I had discovered this record in a recent repress/remaster on vinyl from Rhino/RTI. While the vinyl version is not an audiophile masterpiece, it is definitely better than this SACD master. On the SACD, in many parts highs are screeching and the volume is way too high, like tape saturation of some kind (the vinyl version does not exhibit these, for some reason I don't understand). The more quiet tracks are OK, but the more dynamic tracks are a pain for the ears. I have the Genius After Hours in this series, which is much better sonic-wise, even though the music is probably better on this one. 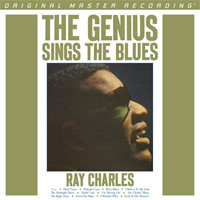 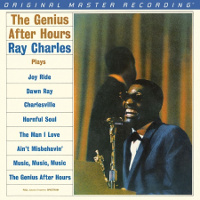