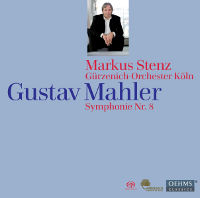 
The world premiere of the Eighth Symphony of Gustav Mahler (1860 – 1911) on 12 September 1910 in Munich under the composer’s own direction was a triumph. As never before, the star conductor was also acknowledged by the public as a composer. The work had been composed four years prior to the premiere. “It is the largest that I have done so far. And so individual in content and form that one cannot write about it,” the director of the Vienna Court Opera reported in August 1906. OehmsClassics presents the SACD as a live recording of the concerts performed at the Cologne Philharmonie in September 2011.

The Mahler cycle from Marcus Stenz and his Cologne Gürzenich Orchestra continues apace. Critical comment has been split, with some reviewers disappointed with his clear vision and "back to the score" approach, accusing him of ignoring accepted performance practices and being a "Literalist". The orchestra has certainly proved itself to be a true Mahler orchestra, and now takes a leap from the 'Wunderhorn' symphonies to the Eighth, often called "the Symphony of a Thousand".

Recording took place in the Philharmonie hall from September 23 - 27, 2011. On 23rd and 24th Celebration Concerts were held to mark the opening of the new Philharmonie in 1986, when it was launched with the Symphony of a Thousand conducted by Marek Janowski. The amphitheatre design of the Philharmonie gives it one of the finest hall acoustics in the world, and its space easily accommodates the large, augmented orchestra and Stenz's six choirs plus eight soloists. A tiered circular seating plan preserves a certain intimacy between musicians and audience arrayed in the tiers, with the orchestra on a central circular podium. A large Klais concert organ is permanently installed at the left of the podium. In other words, this recording was made in what is probably an optimal venue for the capture of a Mahler Eighth performance.

Stentz recruited no less than six choirs to his musical roster, much the same line-up as his well-praised Resurrection Symphony (Mahler: Symphony No. 2 - Stenz). Local to Cologne and nearby Bonn they are not professionals but very well-trained and experienced. The children's choir is excellent, bright and energetic, especially in the Gloria of Part 1 and the Young Angels section in Part 2. Dudhamel's Eighth, earlier this year with the San Francisco and Simón Bolívar Symphony Orchestras, boasted a chorus of 1,207, but Stenz's somewhat more modest ensemble still produced a thrilling mass tone at climaxes, also managing the very soft, slow interludes with equal finesse.

The soloists too are well-matched and on top form. I was particular impressed by Barbara Haveman as first soprano (Magna Peccatrix in Part 2), who tackled the fiendish part written by Mahler with many high Cs, which she risks all to reach, usually landing spot on. Miraculously, her already strong voice seems to gain in strength as the symphony progresses, so that in the final bars she remarkably has enough stamina to soar above the full ensemble's sound, together with Orla Boylan (the benefits of editing?!). Christiane Oelze presented a sweet, radiant Gretchen; Brandon Jovanovich (tenor) a serious and humane Doctor Marianus and bass Günther Groissböck as Pater Profundus lived up to his name, with a wonderfully dark, rich and caring tone.

From the start, Stenz makes it clear where he is going to, negotiating Mahler's hymns first to the creative and Creator spirits, then to Goethe's notion of the eternal female, through whom eternal life, he believed, was to be attained. He launches the ancient words calling on the Holy Spirit, "Veni, veni Creator Spiritus" as impetuously as Mahler instructs, so the first huge organ chord launches a seemingly unstoppable journey. We arrive finally at the first attainment of the Symphony, the blazing Gloria, which carries pure energy only surpassed by the last few pages of Part 2, where Mahler seeks to give us the ultimate vision of the proposed eternal happiness in Heaven. Perhaps it is only Music which could carry Mahler's message, and for believers and non-believers alike, the resounding extra brass instruments added to almost over-powering voices and instruments is always bound to make listeners (and participants) highly emotional. Marcus Stenz and his combined forces make sure of that.

There can be no such thing as a perfect Mahler Eighth. This applies to sonics too, and recording such a huge enterprise must be one of the most challenging jobs of the record industry. Given the prior experience with the Resurrection Symphony, and the ideal size and acoustical aid from the Philharmonie, the OEHMS engineer and producers have produced a marvellous 5.1 multichannel recording which probably exceeds other SA-CD accounts. This is certainly a big step forward, from Solti's pioneering account with Decca to whatever audio system we might have in 25 years.

This recording wraps around you like no other, thanks to the Philharmonie's amphitheatre-like architecture and the placing of the musicians. Tiers of chorus members extend into the sides of the listening room, although the overall focus is frontal. Soloists were placed at the back of the orchestra, just below the choir. When the extra brass arrive in the final pages, they resound from every direction, and despite the huge dynamics, the disc plays with no discernible distortion. Switching to stereo at this (and any other) point gives an immediate feeling of disappointment, as the sound collapses like a balloon to a flat canvas, with a big drop in volume. Of course, if you haven't got multichannel, you won't experience this sense of loss, and at suitable volume, the stereo track is very good, but as an emotional experience, much less so than when listening to 5.1. In 5.1 you get more deep bass, and the surround enhances the organ part, which is notably more powerfully present than usual, as are the big cymbal and huge tam-tam strokes at the end. That is the spectacular part; the other is the wonderful detail, even in the softest music.

OEHMS provides an essay (English and German) by Oliver Binder on how a palimpsest of Mahler's original plan for a four movement symphony still exists in the final two movement stage; a fascinating and persuasive account, but still somewhat conjectural. The texts are in Latin and German. My copy of the booklet has text-lines printed with an inexplicable through-line in several verses on pp. 13 and 15.

Collectors already engaged in the OEHMS Mahler Cycle will be delighted by this issue; some critics will predictably object to Stenz's "straight-off-the page" Mahler and avoid it. I suggest giving it a try, particularly it has as a bonus one of the best attempts at placing you in the audience. 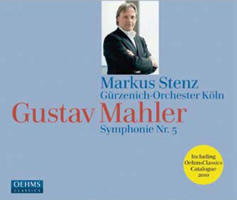 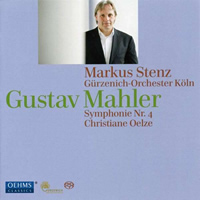 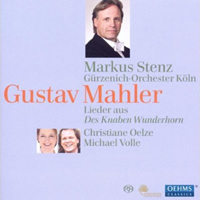 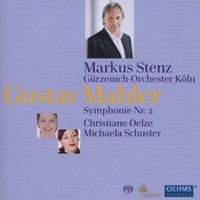 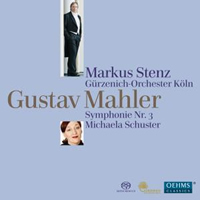 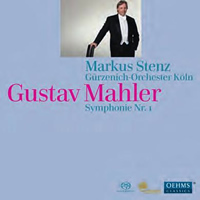 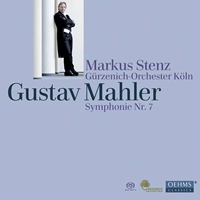 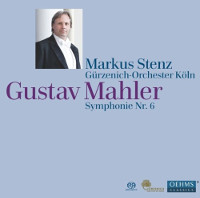 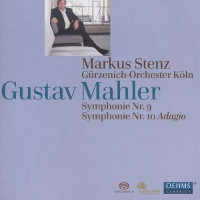