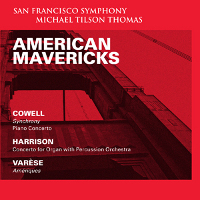 My dictionary defines a maverick as 'an unorthodox or independent-minded person' and one could not find a better description for each of the three composers featured on this stimulating and superbly recorded SACD from SFS Media.

America has produced many such mavericks over the past century and the list could be extended to include Charles Ives, Lukas Foss, Ruggles, Steve Reich, John Cage, John Adams and many more.

Henry Cowell (1897-1965), whose 1930 piece 'Synchrony' opens this disc, is most associated with the invention of the term “tone clusters” in which the piano is played with the fingers, the fist or forearm to produce terrifyingly dissonant chords. 'Synchrony', however, opens with a long (3minute) trumpet solo, fluently played by the San Francisco Symphony Orchestra's principal trumpet, before the full orchestra enters with music that bears a striking resemblance to that which opens Part 2 of Stravinsky's 'Rite of Spring'. The music becomes more animated and inventive as textures thicken yet Michael Tilson Thomas and his superb orchestra perform this complex and imaginative piece with absolute confidence almost as if it was standard repertoire. The audience respond with warm, though not effusive, applause.

Cowell's 'Piano Concerto' is a tougher nut to crack. Its three short movements entitled: I Polyharmony, II Tone Cluster, III Counter Rhythm each feature a virtuoso piano part brilliantly played here by Jeremy Denk. In the concerto's central movement it is easy to spot the influence of Cowell's work on Bartok's writing for the piano while the spiky finale extends the conflict between soloist and orchestra to the ultimate degree before reaching amusing resolution in the final triumphant bars that bring a well-deserved enthusiastic audience response.

The most spectacular work on this disc is the 'Concert for Organ and Percussion Orchestra' by Lou Harrison (1917-2003). Harrison studied with Cowell in San Francisco (1943-4) and also with Schoenberg in Los Angeles, but though his music does embrace serial techniques he is essentially a melodist. Many of Harrison's compositions from the 1930's onwards feature the use of percussion instruments and reflect the composer's interest in Javanese and Balinese gamelan music. This thrilling five-movement concerto delights the ear with exotic sounds – boisterous in the outer movements and contemplative in the three central ones. Paul Jacobs makes a fine sound on the Davies Symphony Hall organ, and it is particularly gratifying to note that the audience restrain their excited response to the performance until the concerto's final note has faded completely into silence.

Strictly speaking Edgard Varèse (born in Paris in 1883) is not an “American Maverick” though most of his major compositions were written after he had emigrated to the United States in 1915, and he did take American citizenship twelve years later. His orchestral work 'Amériques' (performed here in its revised version of 1927) is probably the most well-known piece on this disc and over the years has received many recorded performances. It is extravagantly scored for a large orchestra requiring nine percussionists and the instrumentation includes a siren. The music shows both the influences of, and debt to, both Debussy and Stravinsky in its orchestration yet is wholly original. MTT's impeccably executed performance emphasises both the work's sensuous beauty and disturbing savagery captured in recorded sound of the utmost clarity and presence.

Though some will find most of this music to be challenging (the antithesis of 'easy listening' ), it certainly rewards those prepared to make the effort, and it would be hard to imagine better performances or recorded sound than what we have here. Give your ears and audio system a thorough work-out with this SACD – you will not be disappointed!