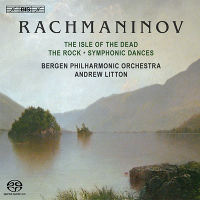 
The programme on this disc includes Rachmaninov's last work, the Symphonic Dances (1941) as well as The Rock, his first published orchestral work, but opens with The Isle of the Dead from 1909. Inspired by the painting of the same name by Arnold Böcklin, Rachmaninov based almost the entire thematic material on the four-note figure which stalks through so much of his music: the first notes of the plainchant setting of the Dies iræ, describing the terrors of the Last Judgement. The motif was Rachmaninov’s musical symbol for death – an ever-present spectre, sometimes feared, sometimes welcomed – and it impregnates the whole fabric of The Isle of the Dead.

If The Rock, inspired by an image from a short story by Chekhov, is a youthful work by a composer just turned twenty, the Symphonic Dances, written almost 50 years later, sum up a lifetime’s musical and emotional experience. The title of the work doesn't reveal a programme of any kind, but when Rachmaninov suggested it to the choreographer Mikhail Fokine as the score for a possible ballet, he explained that its three movements followed the sequence Midday – Twilight – Midnight, possibly a description of life's journey from youth through middle age to old age.

Andrew Litton and his Bergen Philharmonic Orchestra have already proven their skills in the Russian repertoire, with recordings of music by Stravinsky (‘If you're looking for a freshly painted Petrushka or a Rite to shake you up a bit, this is shockingly good’, International Record Review) and Prokofiev (‘An exceptional Romeo and Juliet, to be placed right next to the great ones’, Crescendo).

This recording has received support from the Grieg Foundation.
Works (3)

Anyone wishing for a coupling of these three Rachmaninov orchestral works need look no further than this excellent SACD recorded with the typical veracity that we have come to expect from the BIS label.

Andrew Litton and the Bergen Philharmonic Orchestra open the disc with a powerful account of 'The Isle of the Dead', a haunting tone-poem dating from 1909 and inspired by the painting of the same name by the Swiss painter Arnold Böchlin. Litton's performance of this brooding work is beautifully paced and, from the opening bars - suggesting the movement of the boat across the water – he gradually builds up the tension to its central shattering climax with unerring skill. In passing it's worth congratulating BIS on their choice of an evocative painting of Lake George by J F Kensett ( 1816-1872) for the booklet cover rather than using, as so many companies do, the clichéd Böcklin painting.

The orchestral fantasy 'The Rock' is Rachmaninov's earliest published orchestral work and though it is certainly not a masterpiece like 'The Isle of the Dead' it is an imaginative composition full of sparkling orchestral sonorities reminiscent of Rimski-Korsakov to whom it is dedicated. Thanks to the beautifully balanced recording and imaginative playing Litton and his orchestra make the strongest possible case for a work that rarely appears on concert programmes.

Rachmaninov's final orchestral work, the much-recorded – even on SACD – 'Symphonic Dances' completes this disc. Litton's tempi for each of the three dances are quite fast but not excessively so. The orchestral playing is particularly crisp and incisive. In the opening dance Litton allows himself some interpretative licence by heavily emphasising some chords. He is quite free with his use of rubato in all three dances but it all sounds entirely natural, never mannered, nor is the forward thrust of the music ever impeded. The final dance is a veritable tour-de-force with magnificent playing from every section of the orchestra especially the percussion section which is recorded with terrific impact. The one disappointment is that the final tam-tam crash is cut off immediately rather than being allowed to gradually die away to silence.

The 'Symphonic Dances' were recorded in March 2008 and the other two works in June 2009. The 5.0 (44.1/kHz /24 bit) recording has great presence, but perhaps lacks a little of the ambience of the Grieghallen, Bergen that one finds on other recordings from this source.

These are idiomatic performances of lush, romantic orchestral scores that include Rachmaninov’s first and last orchestral works. While these performances do not rise to the pinnacle for me in terms of sheer depth of feeling they do represent the music very well and one would not go wrong with this very well-filled (71 min) SACD in their collection.

The Isle of the Dead is a tone poem inspired by Bocklin’s painting by the same name although BIS chose not to reproduce the painting in the booklet – too bad since the painting does evoke a sense of mystery and foreboding that is well reflected in the score itself. Litton and crew set a somber, rocking motif reminiscent of a small boat lapping the waves as it makes its journey across water to the isolated, craggy mountain. The music swells dynamically in the right places and then what should enter but the menacing Dies Irae melody that Rachmaninov seemed to be infatuated with in his compositions. The music dies away with the rocking motif. Overall, a very good if not great performance from Litton and the Bergens.

The Rock is an orchestral fantasy and was Rachmaninov’s first published score for orchestra. It certainly has influences from Tchaikovsky throughout its 13+ minutes but I also hear bits and pieces of Liszt as well. I’ve always been an admirer of this little-recorded work and here Litton seems to excel in setting just the right mood. The turbulent middle section pulses and erupts in the same somber vein that was present in The Isle. These two pieces make good companions.

The main attraction here is the Symphonic Dances, one of Rachmaninov’s most potent and beloved scores and one that has received an abundance of recordings, seven of which are on SACD. This is a very fine performance. The recorded sound for this work seems just a bit more dynamic and closer in than the other two works which were recorded 9 months later, giving the sound a tab more sparkle and life. This benefits the performance. I’ve always been curious as to why Rachmaninov referred to these three movements as “dances” and the booklet notes do a nice job of explaining the origin of that concept (he had hoped to have the music choreographed for the ballet stage). Litton and the Bergen Philharmonic create a beautiful tone canvass with judicious use of dynamics and rubato to maintain interest. Once again, as the last movement builds to its climax, the Dies Irae melody makes a brief appearance in what was to be Rachmaninov’s last score.

The recorded sound is very good – very dynamic with natural timbres, especially in the Dances. The balance of direct and hall sound is well judged. The percussion and timpani are quite impactful when called on in the scores. A solid recommendation for both performance and sound. 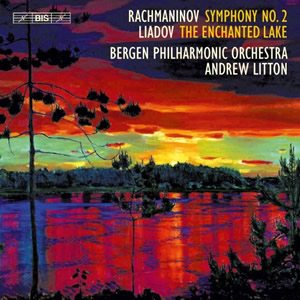