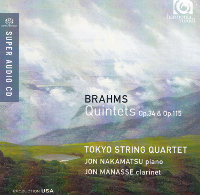 
The Tokyo String Quartet is joined by pianist Jon Nakamatsu and clarinetist Jon Manasse in a recording of chamber music masterpieces by Johannes Brahms dating from two very different periods in his life. The tumultuous Piano Quintet, Op.34 is the fiery work of an ambitious young man and the Clarinet Quintet, Op.115 is an autumnal serenade by an experienced master. The composer's journey between these two milestones was one marked by criticism, soul searching and ultimately, triumph.

Despite a number of personnel changes in the 44 years since their foundation, the Tokyo Quartet have remained amongst the most illustrious of chamber ensembles. Armed with their Stradivarius instruments (from the historic Paganini collection), they not only play over a hundred concerts a year but also teach young musicians at the Yale School of Music. For many years they recorded exclusively for Deutsche Grammophon, and now they have joined Harmonia Mundi USA. This means that at least some of their recordings are now on SACD, with the DSD captures bringing to listeners the full tonal splendour of their playing (e.g. Schubert: String Quintet D.956 - Tokyo String Quartet, Watkin).

Neither Jon Nakamatsu (pianist) or Jon Manasse (clarinetist) have not yet attained the elevated status of the Tokyo Quartet, but these young musicians are already collecting many plaudits for their live performances and recordings. On this occasion they are playing as soloists, but otherwise they are a duo which plays and records chamber music such as the Brahms Sonatas for clarinet and piano (RBCD).

The Brahms Piano Quartet in F minor, Op.34 had a tumultuous gestation and a difficult birth. It was initially conceived as a String Quintet, but was rejected by Joachim, the virtuoso violinist who was a mentor for the young composer. It next became a work for two pianos, but Clara Schumann, another of Brahms' advisors, was insulted because she felt she had been given an arrangement rather than a new work. Ultimately, by late 1864 Brahms had solved the problem by reconstructing the material as a Piano Quartet, using Beethoven's 'Appassionata' sonata as one of its models. He also used a small group of energetic motifs which appeared in each movement, giving the whole, quite lengthy, piece an integrated organic fabric.

Piano Quintets are notoriously difficult ensembles to balance, as modern grand piano sound can easily overwhelm a string quartet. Jon Nakamatsu uses a 1929 Steinway Model D (restored) for this disc. Although the basic sound of Steinway Ds has hardly changed since the late C19th, many older pianos have a depth of tone and feel that is more even and perfected with time. As theHarmonia Mundi engineers have portrayed it, the older Steinway piano is more mellow at the top and burnished in the bass, an ideal sound for the Brahms Quintet. Nakamatsu's technique is impeccable in this often tumultuous work, but rather than be flamboyant, he listens carefully, matching his tone and dynamics to the quartet. The result is a compelling reading, intelligently structured and emotionally expressed. The strength and nobility of the passionate young Brahms' score is beautifully offset by passages of tender restraint; Brahms' radiant Andante in particular being treated with long-breathed ardour.

That Brahms was inspired in 1892 by hearing the remarkable clarinet playing of Richard Mühlfeld is well-known, and not only the quintet resulted, but two clarinet sonatas as well. I'm going to resist describing Brahms' demeanour at the time as "Autumnal": this label after the fact has become an empty cliché in every Brahms text. The glorious Clarinet Quintet in B minor Op.115 rather emerged at a time of burgeoning creativity for Brahms, not a winding down towards oblivion.

Just as with Nakamatsu, Jon Manasse forms a scrupulously observant partnership with the Tokyo players, also scaling back his tone when his part is obviously accompaniment, not something which all concert pianists will do. The result is a gloriously unaffected, natural sounding performance which draws the listener in to be enthralled. Just listen to the trio of the Adagio, where the playing melts into a deeply-felt recollection of Brahms' former connections with Hungarian music. Manasse's liquid runs and inwardly felt passion mimic the virtuoso folk clarinettist, while the Quartet members stage a convincing imitation of an accompanying Hungarian cimbalom. Manasse uses no vibrato, and remains in tune whether in above the stave notes or down in clarinet's luxuriously rich, low chalumeau region.

Given an ideally-balanced, highly detailed and naturally presented recording with bloom from an open acoustic, these are without doubt among the best recordings available of the two quintets. As a programme, they are both complementary and contrasting, and so are very well-matched. Each new playing reveals further delightful and vitalising aspects of these paramount chamber works. Highly recommended.