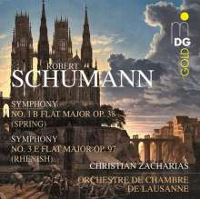 
Spring Spirit
Robert Schumann composed his first symphony in a fresh and youthful mood, free at last, and full of springtime renewal. And just how fresh and youthful the Spring Symphony does indeed sound today is something that nobody can better convey than Christian Zacharias with his vital and agile Orchestre de Chambre de Lausanne, which on this latest release concludes its highly welcome new SACD recording of Schumann’s symphonies.

Radiant Sun
“Springtime comes to the valley!” August Böttger’s “Spring Song” accompanied Schumann during the composition of his first symphony. Even if he withheld the explanatory words from the public (it was supposed, in the typical romantic manner, to exercise its own imaginative powers), the beginning of the first movement in the manner of a fanfare was indeed composed to this text. It is marvelous how it flashes and shines, as if the radiant March sun were dispelling all that might remain of wintry sadness!

Rhine Sublimity
Schumann’s famous Rhine Symphony, which he began to compose soon after his move to Düsseldorf, is also replete with programmatic allusions. Proverbial Rhine mirth sparkles from the framing movements, and in the highly exuberant first movement some brushing is done against the rigid meter. The solemn fourth movement is enigmatic, and Schumann is supposed to have been inspired to compose it by the sublime impression made on him by the imposing Cologne Cathedral construction site.

Remarkable Rendering
Schumann’s intention is freshly and livelily rendered in the trim instrumental dimensions of the Lausanne Orchestra, which comes very close to the size of the premiere ensemble. Captured in MDG’s trademark style, in the full three-dimensional sound of 2+2+2 SACD technique, the instrumentation, often unjustly criticized, suddenly becomes clear and transparent – a life-affirming feast of the senses! 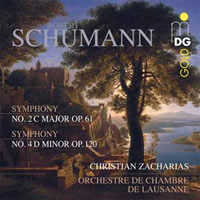