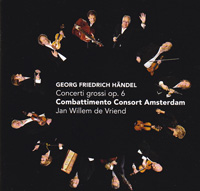 
The creative riches of structure and the broad diversity of styles that Handel exhibits in the 61(!) movements of his 12 Grand Concertos, time and again coloured by a surprising palette of musical expression, is unique, and has led to his opus VI being generally considered alongside Bach’s Brandenburg Concertos as one of the great monuments of Baroque instrumental music.

Combattimento Consort Amsterdam, over the past 30 years, have gained a reputation as a highly respected period instrument ensemble, specialising in music from 1600-1800. Their flexible membership ranges from chamber groups to chamber orchestras, under their Director Jan Willem de Vriend, who is also a violinist. Their particular energetic way of playing and crisp ensemble has become known as the "Combattimento School" of performance. Having produced a fine account of Handel's Concerti Grossi Op. 3 (Handel: Concerti Grossi Op. 3 - de Vriend), they now move on to the later, and even finer, set of Handel's orchestral pieces.

The Op. 6 set was scored for strings with continuo, and that is how it is usually played and recorded. However, the autograph has some added pairs of oboes and bassoons in Concerti 1,2,5 & 6; these are optional parts in Handel's own hand, and were meant to by played when Handel used those Concerti during performances of his oratorios. De Vriend has chosen to use the added wind version for this recording. Some purists might object, but the winds do add extra timbral colours to a score which is already richly coloured in wonderful string textures. The oboes play in the Ripieno group - the main string section, supporting the two solo violins (concertante), while the bassoons are used to double the ground bass for the continuo.

Combattimento's ensemble for this recording sports 12 violins, 3 violas, 2 cellos, double bass, 2 harpsichords, organ and chitarrone (a large bass lute). For the continuo, Handel only stipulated two harpsichords, one for the concertante, one for the ripieno, and a double bass. Optional additions such as chitarrones or theorbos and portative organs (small, mobile pipe organs) were added if venue size was adequate and instruments were available. On this recording, the harpsichords are generally quite reticent, except at special cadences, where they improvise a flourish, perhaps to lead in to another movement. De Vriend deploys the organ to give a more solemn note to the music (Corelli, whose 12 Concerti Grossi inspired Handel, used it for what he called Church Sonatas), and its deep flute sounds can be heard in a number of the slow movements, to great effect.


Handel's Op. 6 Concerti have a much more creative style than Corelli's. Instead of the usual 4 movements, his range from four to six, with five as the commonest. The movements themselves are a rich kaleidoscope of Baroque musical forms, with airs, dances (including a hornpipe) and even fugues, which show Handel's learned side to the educated part of his audience. Some of the Concerti end in fugues, and there are even several double fugues (with two themes). With all this variety of style and substance, Handel was well-placed to play these works to restless or bored patrons of larger events as intermezzi, no doubt enchanting at least some of them. Some of his fans would also recognise many of the "borrowings" from his own and other composer's tunes, although much of Op. 6 is new material. The helpful booklet notes point out the occurrence and source of the borrowings.

The vernal popularity of the Op. 6 Concerti means that there is considerable competition in the recording world, some even with SA-CD. My favourite so far has been Handel: Concerti Grossi Op. 6 - Gester, for its wonderfully spontaneous and often humorous playing, while a recent selection of concerti on two discs (Handel's Memories: A selection from Grand Concertos Op. 6 - Banzo), also a Challenge Classics issue, from the Spanish period group Al Ayre Español has really captured my heart for its intensity of expression and brilliance of execution.

For the complete cycle, Combattimento must be considered, for its playing is vivacious, stylish and inventive, with generally appropriate speeds for each movement. There are some surprises; the famous Hornpipe gains a heavy military stamping rhythm which is not indicated by Handel, and its comic (drunken?) syncopation is minimised. Suonatori do this much better. They also are (conventionally) slower with the lovely Air from Op.6 no.12, iii lasting 3'53", while Combattimento take only 2'23", which noticeably lessens its plaintiveness.

With 61 varied movements, it is unlikely that very critical listeners will find a "perfect" set of Op. 6 Concerti. All three mentioned here have soloists of very high quality, and ripieno playing which makes the most of each movement. They also have excellent recordings. I would, however, describe the recording for Al Ayre's 2-disc selection as being demonstration quality. Challenge come close to this with Northstar's pure DSD recording for Combattimenti in Muziekcentrum Enschede (Netherlands. The listener is in a front seat, or even just in front of the ensemble (there is no conductor; de Vrien directs from the violin), so the acoustic stage is very wide, and the back-and-forth playing of the first and second violins on opposite sides is a joy. No fear of whining strings here, either; the ambience gives plenty of bloom to the strings and they sound almost like modern instruments. This is not to reject the BIS recording for Arti dei Suonatari, which is very good indeed.

I have no hesitation in commending Combattimento's new disc as up amongst the best available in any medium. However, since all three of the disc sets which I have been discussing are mutually complimentary, if you can afford it, get them all! The music itself is never tiring. 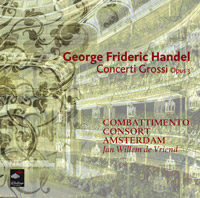