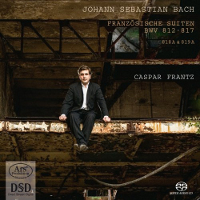 For anyone wanting to know: Caspar Frantz is, indeed, related to his better known and older nephew, Justus. Some years ago (2009), Caspar's Haydn piano concerti Haydn: Piano Concertos 2, 9 & 11 - Frantz were very well received by John Miller. This recording of Bach’s French Suites, including BWV 818a and 619a, on two SACD’s, released three years later, is of equally surprising quality.

Like the cover picture on the earlier one, Frantz is once more sitting on a fence. Any deeper thought behind it? Who knows; just like there is no other explanation about the name of the ‘French Suites’ than that they were composed in a French style. This claim, coined by his first biographer, Forkel, can, however, not be sustained as they were all six modeled according to the then fashionable Italian style. Certain is, that Bach did not name them as such.

On the other hand, Sarah Grossert (lecturer Humboldt university, Berlin), builds in her liner notes, a well-documented case, linking the suites to the French composer Couperin. This makes for interesting reading and reflection. Question remains to what extent Couperin was influenced by Italian composers. He introduced Corelli's trio sonata form to France and amalgamated both Italian and French styles into what he called: ‘Les goûts réunis’.

So much for the name. What about the why? There, too, the situation is unclear. For Bach it apparently was an ongoing project. Adding and changing things in most of them, of which BWV 619a and BWV 818a give evidence. Research shows that it was most probably meant or used as study material for his pupils.

But for us, music lovers, the most important question is: how does Caspar Frantz interpret them? As I said before: surprisingly well. We all have our preferred Bach interpreters. New names in that field are regarded with a fair amount of circumspection. I can reassure readers. As already clear from his Haydn concerti, Frantz has the right touch and fingers for the kind of mathematical playing required for Bach: Light, secure and precise.

I compared with Francesco Cera on ARTS Bach: French Suites, Italian Concerto - Francesco Cera, with the Italian Concerto in F major BWV 971 and Fantasia and Fugue in A minor BWV 904 as extras in lieu of BWV 619a and BWV 818a. The two readings couldn’t be farther apart. Of course, the piano has a different sound spectrum compared to the (mostly amplified) harpsichord, but that is for me not the main thing. Cera plays with half the speed, or sometimes even less; with lots of ‘hesitance’, as though he is looking for the next key to press. This may all be explained as being a difference in perspective and appreciation, but for me it felt frustrating, like the internet slowing down when the rest of my family is taking away band width for surfing or worse: downloading, while I listen at the same time to one of my preferred classical radio stations, WKAR from Michigan State University, on my internet radio.

So, Caspar Frantz style is much, much more to my liking. This is the sort of Bach I would expect; no, or hardly audible pedal and no hesitation other than ‘endings’. And the piano sound is quite attractive and realistic, too.

As far as I’m concerned: another job well done.