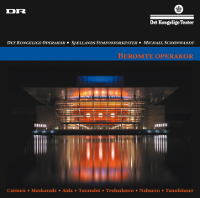 
The Choir of the Royal Danish Opera has several times been called "the world's best opera choir". The title has not had a huge effect on the fame of the choir, either in terms of concerts or CD releases. Hitherto it has by and large only been possible to experience the opera choir if one bought a ticket to a production on the Old Stage of the Royal Theatre in Copenhagen or the new opera house on Holmen.

However, the Royal Opera Choir Society decided to change this after a highly successful collaboration with the Copenhagen Philharmonic. At a joint concert they performed Brahms' Requiem and agreed to meet again soon for a programme of famous opera choruses.