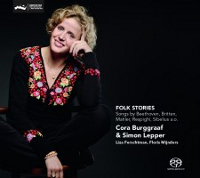 
Many classical composers have been inspired by folk texts and folk music. They were caught by the universal character of the folk texts, by the simple, direct and basic expression of collective emotions. Through their classical arrangements these composers have turned the folk songs into ‘art song’ and hence they ended up on the concert platform. But the natural habitat of these texts and melodies is the living room, or the pub. These musicians aspire with this programme to let go of the formalities of the classical concert, and return to the simplicity of the music, the story telling, to the beauty of it, the recognisable, and to the collective experience

The Dutch mezzo soprano Cora Burggraaf graduated with distinction at the Royal Conservatoire in The Hague in 2002, and pursued her vocal studies in London at the Royal College of Music and the National Opera Studio. She has been the recipient of many prizes including the 2009/2010 ECHO Rising Star Award and has sung in world opera houses such as Teatro alla Scala in Milan, the Salzburger Festspiele, the Bayerische Staatsoper in Munich, the Royal Opera House in London (for which she was awarded ‘Most Promising Newcomer of the Year’ by The Observer), San Francisco Opera, Welsh National Opera, The Netherlands Opera, BBC Proms and the Gergiev Festival. She also has a thriving career as a recitalist in the Concertgebouw Amsterdam, Wigmore Hall London, and the Frick Collection New York. On her ECHO Rising Star tour she appeared many of the major European venues. (I begin my review with this information, because the liner notes do not include any biographic material.)

This project is her début for Challenge Classics, and stems from a late evening's party with a group of singers. Well-lubricated and later in the proceeds, singers began to voice folk songs from their home countries. As often happens at such gatherings, emotions of melancholy and nostalgia overtook the group. This experience prompted Burggraaf to question the nature of Folk Music - an impossible term to define precisely. She realised that many great composers had considerable interest in folk music too, bringing the music of pubs and living rooms into concert venues as Art Music. Her programme is a well-planned introduction to the responses exhibited by Romantic composers to the music passed down from generation to generation to become a significant part of the 19th Century rush towards Nationalism. Confirming the blurred margins of the Folk Song concept, she also includes music from composers such as Mahler and Sibelius, who often imitated folk music idioms rather than use the original material.

Burggraaf begins the disc by reciting the text of "A Sprig of Thyme" (first documented in 1689), a typical traditional British and Irish folk Ballad that uses botanical and other symbolism to warn young people of the dangers in taking false lovers. A fine example of a folksong it may be, but I did find speech rather out of place in this programme. It does reveal, however, that Burggraaf's English is excellent.

First on the song list is Brahms, an appropriate choice, because he was one of the earliest collectors of folk songs and published a number of them in arrangements for soloist and piano, or voices and piano. It has to be said, however, that Brahms was quite naive about what was called a "folksong", since the style was so popular that much of the material in eating houses and bars on his many travels were freshly composed and rapidly circulated to an avid population. The two songs here, one each from 'Volks-Kinderlieder' and 'Deutsche Volkslieder' demonstrate the strophic nature of most of his folk songs, and are given sensitive and warmly expressive performances from Burggraaf and her excellent accompanist Simon Lepper. Burggraaf displays a voice which is quite bright for a mezzo, and also very flexible, as she makes it suit each of the other national groups in the programme.

Beethoven's group of 4 songs from 'Irish Folksongs' WoO 152 and 153 were written for voice and piano trio, between 1809 and 1820. In fact, he evidently found this genre to be an ideal subject for his development at that time, as he wrote 179 settings of folksongs, mostly Irish, Scottish and Welsh - more than of any other forms in his output. The piano trio, a combination borrowed from Haydn, adds a wonderful richness to these often starkly dramatic Celtic stories. World-class violinist Liz Ferschtman and first-class cellist Flores Mijnders are guests, making up the trio with Lepper. These Irish Folksongs are rarely played, let alone recorded, and I suspect many listeners will enjoy these four greatly and look for other recordings.

Two familiar songs from Mahler's 'Des Knaben Wunderhorn' follow. Evidently relishing their sardonic humour, Burggraaf lightens and lifts her voice towards Elisabeth Schwarzkopf's coy approach, although she doesn't manage a donkey's "He-Haw" in 'Lob des hohen Verstandes' as expertly as Schwarzkopf, instead she startles the listener with the sudden loudness of its bray.

Benjamin Britten provides 5 varied folksongs, most of which were written with Peter Pears' distinctive tenor in mind. 'The Plough Boy', 'O Waly, Waly' and 'The bonny Earl o' Morey' are very popular, but the two French songs are less well-known. Burggraaf characterizes them well, with a bragging plough boy telling tales about his advancement (Britten's terrific piano parts are fully relished by Lepper); the "Scottish Snap" rhythm of the Earl of Moray propels this otherwise dark and tortuous story to its conclusion. 'O Waly, Waly' is heartfelt, especially in tits gentle and tender ending. Burggraaf takes the part of a whining apprentice shepherd in 'The Plough Boy', sardonically listing all the bad things of the occupation as demanded by his father, and she winds up the tension superbly to a final outburst of frustration.

Ottorino Respighi isn't usually known for his songs, but three of them from 'Quattro Lirihe: Antica poesia popolare armenia" should show what a sensitive and sympathetic song composer he was. Burggraaf projects the heart-broken mother who refuses to believe in the death of her child, and the lament of the Virgin Mary about the death of her son Jesus makes her voice more rounded and Italianate, with good Italian diction. The last song's atmosphere lifts the spirits with a jaunty comic story about a mother who is "like a bread that is newly baked".

Béla Bartók immediately comes to mind when the topic of folksong comes forth. He was an inveterate collector of songs in remote parts of Hungary, in latter years using the new-fangled recording machine. The duo selected four songs from the books of Hungarian Folksongs which Bartók published. He takes these songs into another world, in which Burggraaf assumes a slavic tone and Lepper handles with authority the bitonal acerbic harmonies which anchor these songs back into the darker world which conceived them. Together with the Beethoven songs, these were highlights of this recital for me.

Sibelius' three songs show his instinct to write melodies in the speech-rhythm of the Finnish book of ancient poetry, the Kalevala. Showing once more her talent for languages, Burggraaf tackles Swedish very well, bringing forth the delicate and inward-looking as well as the grandiloquent sweeping tunes which are kin with some of those in the Sibelius symphonies. Lepper plays the accompaniments in an orchestral fashion which impresses greatly, and in general he is an empathic yet explorative accompanist.

The solemn task of doing duty to folksongs complete, Burggraaf and Lepper leave a delectable comic calling card in the form of a bonus track. It is a continental cabaret song (the folksong of the Future?) by Jan Vogel (1902-1983) called 'Ketelbinkie'. She sings wickedly and archly in her own tongue and as an encore I can imagine that this would recharge audience applause quite easily.

The booklet has the songs printed with good English translations (where appropriate) and this seems to have eaten up space so that there are no notes on the artists, or information on the music itself. Burggraaf writes about the party which inspired the disc, and muses somewhat on the definition of folk song. It is a pity there are no pictures of the artists, beyond Burggraaf on the cover.

Enjoyable in its own right, this many-faceted disc will surely have listeners and fans of Art Songs scurrying to find some more recordings of the lesser-known songs here. Hopefully Burggraaf and Lepper will return to studio and record some more songs. Imagine a whole disc of Beethoven's Irish Folksongs, bringing back Liz Ferschtman and Floris Mijnders to complete the trio!