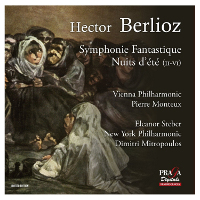 
In 1831 Berlioz extended modern orchestral art with this 'Symphonie Fantastique' which served as a programme model for Mahler and Wagner and later for Debussy's 'La Mer'. Of the 118 recordings since 1930 the models which inspire most are still those of Pierre Monteux and Charles Munch (pace Jean Roy). The American soprano Eleonor Steber recorded 'Nuits d'été' in 1953 with the blazing support of Mitropoulos and the New York Philharmonic, the most possessed and convincing version of this masterpiece ever played.

A fascinating and enjoyable recording from the archives.

For the bulk of the disc, we are treated to an account of Berlioz's Symphonie Fantastique from Pierre Monteux who must have known the work backwards by the time he made this radio recording with the Vienna Philharmonic in October 1958. Comparison to more modern accounts like the classic Berlioz: Symphonie Fantastique - Davis and a marvellous quasi-HIP Berlioz: Symphonie Fantastique - Ticciati are of course unfair when comparing sound quality but in musical matters, this firmly belongs alongside both accounts. Like both Davis & Ticciati, Monteux divides the violins left and right of the podium bringing huge dividends in relaying the drama of the music and also lightening textures - this is no Berlioz a la Wagner exercise. In terms of tempos, Monteux is marginally quicker than Ticciati in each movement (except for the first movement where he accords the sonata form structure more time and weight) and takes a similar approach to Davis (except for a more forward moving Scene aux champs). Where both Davis and Ticciati differ however is in their inclusion of repeats in the first and fourth movements whereas Monteux omits them.

The Waltz is played beautifully, the Viennese players clearly relishing the opportunity to play a dance in 3:4 time without it coming from the pen of the Strauss family! The Scene aux champs is perhaps the highlight of the account for, despite the limitations of the recording, as the textures are (until the climatic thunder storm) the least dense, this part of the performance is portrayed most truthfully. The start of the Marche au supplice has remarkable stopped brass that is most effective and the movement as a whole has a wonderful swagger (despite the lack of impact relayed by the tapes). The opening of the Songe d'une nuit de sabbat reveals just how much detail can be heard when the dynamic level is relatively stable in Berlioz's score. If anything, the Vienna Philharmonic are just too refined here - the witches sound like people you'd happily invite round for babysitting! The use of real bells is very atmospheric but it is a shame that only one of them could be in tune - this does sound more true to life perhaps, though. The fugue is built to a thrilling climax, spoilt only by the obvious deterioration in the tape on the very last chord.

Generally the sound is reasonable but at louder tuttis, the percussion (in particular) are rendered all but inaudible (from the sound of the orchestra, I would wager it is not Monteux's doing). Similarly, in similar passages one can hear definite distortion to the sound of the famed Viennese string tone and more than once there are clear signs of deterioration in the quality of the tapes (the Marche au supplice being the most afflicted). These considerations alone must rule out this account from being a "library choice" but for those already possessing a better recorded account, this makes for a fascinating document of Monteux and the Vienna Philharmonic alike.

At the time of writing, this is the only account on SACD of Nuits d'Ete. Eleonor Steber is in radiant form and it is sad that, despite the score saying a mezzo-soprano is suitable for all 6 songs, the first (Villanelle) is omitted. Absence sounds wistful and Sur les lagunes - Lamento certainly matches the lament part! The characterisation of Steber and the NYPO under Mitropoulus is vivid and makes one long for more. Thanks to the less radical orchestration and composition, this work is less taxing than the Symphonie Fantastique, so the broadcast and tapes have less to cope with. For the most part, Steber's voice is captured with a remarkably life-like quality.

When considering all the sonic problems these accounts have, it must be stated that the amount of hiss (practically non-existent) is remarkable and yet there is little audible effect on the timbre of the orchestras. One other area of the sonic picture that suffers, which most won't be surprised to find, is that the dynamic range relayed is clearly far compressed compared to the variety audible from timbre.