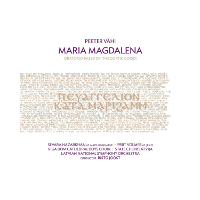 Peeter Vähi (B. 1955) is an Esthonian composer with eclectic tastes and a questing mind. During his training he took interest in oriental music, as well as Baroque and electronic music. His compositions demonstrate an ability to merge the popular with the classical, in such pieces as his White Concerto for guitar and orchestra, and he is also a performer (keyboarding, singing) as well as composing. Significantly for the gestation of his Maria Magdalena Oratorio, he is also a member of Estonian Academic Oriental Society.

Wishing to move away from the now very well-trodden track of standard Christian topics for setting to music, Vähi turned to the Coptic Codices which include the so-called gnostic gospels. These texts were excluded from the New Testament by the Council of Nicea in 325 A.D. The probably Second Century "Gospel" of Mary does not clearly identify its central proponent, but many scholars believe there is enough evidence in the document that it was Mary Magdalene. The document is incomplete, missing six pages from the beginning and four from the middle. At the narrative's start, Jesus is engaged in dialogue with his disciples, answering their questions on the nature of matter and the nature of sin. When the discussion ends, the Savior departs leaving the disciples distraught and anxious, as well as jealous with each other and Mary, who seems to get more attention from Jesus. Then Mary speaks to them with words of comfort and encouragement. She next relates some special teaching she had from Jesus, concerning visions he had given her, and recounts the progression of a soul as it passes on the way to its final rest, engaging in dialogue with four powers that try to arrest its progress.

Vähi must have been tempted by the Middle Eastern locus for the unusual narrative itself, and by the dramatic possibilities of its contents. But there were obstacles to overcome. Apart from several fragments in Greek, the Mary Codices are in one of two dialects of the Egyptian Coptic Language - unfortunately, the Sahidic one, which is long extinct. Vähi thus had to recruit a scholarly expert on the Sahidic codices to help with likely pronunciation of the Coptic text for choruses and soloists. Here the listener too meets a problem. While the Oratorio is sung in Coptic, and the Coptic text is reproduced in the Digipak's booklet, there is no translation provided therein.

For this, one has to go to the Estonian Record Productions website (www.erpmusic.com). On the Maria Magdalena page, a small link to "Download: original Coptic text and English translation (pdf)" takes you to a pdf file, which is a table with Coptic on the left and English translation on the right. All very well, except there are no indications of where the 7 untitled movements of the Oratorio begin and end, which part of the text is sung by which soloists and what text is being sung by the choirs. In other words, to follow the action of the Oratorio, you need to be an expert in Sahidic Coptic, or buy the score.

So, at the moment, appreciation of the dramaturgy of Vähi's over 61 min. composition depends mostly on the music with very little help from the words (a little Greek helps). And the scale of Vähi's work is impressive. The Latvian National Symphony Orchestra is extended with 2 piccolo flutes, a piccolo clarinet, 4 trumpets, 2 long horns, metal sound plates, a thunder-sheet, 3 sistrums. 2 double-headed Egyptian drums, 2 harps and nature sounds with other recordings (wind, thunder, bells, water and Coptic liturgy). Much of this battery of instruments is used in the Mahlerian way; almost as chamber music, so that the big climaxes, when they come, are all the more effective. Choral vocals are provided by the State Choir Latvija and the Riga Cathedral Boy's Choir. Soloists include Sevara Nazarkhan (soprano, Mary Magdalene), Juris J&#275;kabsons (tenor, Andreas), Eduards Fiskovi&#269;s (baritone, Levi), Priit Volmer (basso, Jesus), U&#291;is Me&#326;&#291;elis (basso, Peter) and Peeter Volkonski (narrator).

The instruments and recorded sounds are blended judicially together to provide musical evidence of a particular location or general atmosphere, and they are applied consistently so that returning to the that place or emotional state is quite obvious as the narrative unfolds. Vähi's locus typicus is in First Century Palestine, and the harmonies, melodies, instrumental sounds and recordings immediately tell us that. In fact, I was reminded frequently of Maurice Jarre's wonderful score for Lawrence of Arabia - the heat, the sweep of the desert, the tranquil calm and tinkling of water in an oasis. Quite large bells, like those used in Orthodox churches, are a recurring presence, often answering one another across the stage. A crashing tam-tam is used to enhance tuttis, but can also be gently stroked as an indication of Oriental voluptuousness, perhaps underlying dances with sistrums and double-headed drums. The "long horns" produce a similar noise to the Jewish temple shofar (a ram's horn which is blown at certain times from the Temple), and they sound very close to the shofar which Elgar used in his oratorio The Apostles' morning scene. While mentioning parallel styles and sonics, I did also often think of Verdi's Aida, particularly in the marches, and the repeated ostinato bass lines sometimes seem to be inherited from Arvo Pärt.

Vähi and his very skilful conductor, Risto Joost, have chosen the voice types of their soloist characters very carefully. Sevara Nazarkhan (soprano, Mary Magdalene) does not have an operatic voice. She is an Usbek with a world-wide reputation for folk and modern ethnic music. Her voice is pure but not very strong, in fact she is appealingly fragile at times; she really does establish a character for Mary. I suspect that tenor Juris J&#275;kabsons is also not an opera singer; his voice is youthfully slender and is clearly under pressure in the higher register. He plays Andreas (Andrew), a doubter of Mary's statements, which she claims to be from Jesus.

The trio of male voices (Jesus, Levi and Peter) are basses, which gives them appropriate authority and gravitas, and Vähi's writing for them, in the tradition of Baroque Passions, is full of vocal colour and expression. This is also true of the Narrator, who has a sprech-stimme style based on the Coptic speech rhythms, but sounding surprisingly intimate, cajoling the listener to listen to this wonderful story. The Narrator also seems to have the role of introducing the characters as they "speak".

Even without the due linguistic guide to its structure, the arc of Mary's narrative can still stand out as a choral/orchestral symphonic tone poem, despite the episodic construction of the incomplete Coptic text. The ingenuity and consistency of Vähi's convincing impression of an archaic Middle-Eastern location is remarkable. The impact of great climaxes and thrilling fanfares from the powerful extended brass is offset by quiet, slow sections (often for Mary herself) which are of stunning beauty. Both mixed voice and boy's choruses are on excellent form, as are the Lahti National Symphony Orchestra players, although the venue doesn't give the violins a very rich sound. Special congratulations go to Risto Joost, whose baton maintained a crisp ensemble from such a large set of musicians, shaping the performance of this complex work with great insight.

The issue comes in a lightweight cardboard digipak with the disc at the front in a standard plastic tray. A full text in the Coptic begins the booklet, and frankly this is rather wasted, as very few Coptic readers will handle the album. If the two columns of the text were arranged like the pdf download, with an English translation in the second column, this would have been more useful. And while, as a professional geologist, I admired the four full page, coloured photographs of the effects of severe desert weathering on rock formations, they could easily have been removed to give room for a properly annotated translation of the lyrics, indicating who is singing each section, and where the break points of the seven movements are. This could immeasurably increase one's appreciation of this novel and thought-provoking oratorio. However, the booklet is now published and unalterable, but the pdf download could easily have the required information added, and I would urge Estonian Record Productions to do this. I'd love to listen again with full knowledge of what was going on!

Sonically this SA-CD is very clearly recorded, being originated in DXD and mastered in DSD. The venue of Great Guild Hall, Riga (an English Gothic structure erected over the original 1354 hall) sounds a touch dry for such high dynamics, possibly a function of the microphone array. There isn't a very strong sense of a solid front-back perspective, even with multichannel mode, although there are plenty of striking L-R exchanges, particularly with bells. Low reverberation certainly means plenty of detail, so the double-headed Egyptian drums and other percussion, like the metal plates, sound quite spectacular, as does the large array of trumpets. Recorded natural sounds are mixed in very subtly, such as the atmospheric sound of desert winds at the opening and closing of the Oratorio, or violently, with thunder so violent that one can almost see the lightning. Soloists are nicely balanced, not too far forward; thankfully the engineers resisted heavily spot-miking Sevara Nazarkhan's light voice.

After hearing so many standard classical oratorios covering the same New Testament texts, it is a real pleasure to hear such a novel and deeply satisfying creation from Vähi, especially one that is both easily accessible, yet modern in outlook and execution. Of interest to all lovers of fine choral music, I urge aquisition of this disc: given the large forces involved and the time and effort required for training singers in Sahidic Coptic it is unlikely to be performed live very often. Highly recommended for a novel experience.