Bach: Mass in B minor - Savall 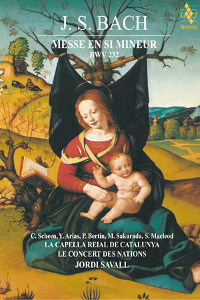 Bach: Mass in B minor, Live in Fontfroide Abbey


Believing that the chorus parts are of a complexity even greater than that of the solo parts, Jordi Savall handpicked for this recording an 'academy' of young singers destined for careers as solo professionals. The technical and artistic quality of the result obtained after several weeks of rehearsal is beyond superlatives. Jordi Savall chose to adapt the number of singers in each section of Bach's sublime Mass, in his first recording of a vocal work by Bach, after giving reference versions of the Brandenburg Concertos, the Art of the Fugue and the Musical Offering.

DVD1: Mass in B minor captured at Fontfroide Festival in 2011 in the nave of the Abbey Church,
DVD2: documentary 'Bach and Savall in Fontfroide' about the rehearsals of the Mass in B minor (French only)
2 HYBRID SACDs: Bach Mass in B minor - Audio multichannel version of the concert
Works (1)

As is usual with a Jordi Savall release, there is always something a bit special; even in the familiar music such as Bach's masterpiece presented here from a magical night in 2011.

Before discussing the SACD material, it is important to outline what the two DVDs that are included in this issue contains. The first DVD is the performance of 19 July 2011 - the same as that presented on the SACD's, so the musical aspects will be discussed later. The camera work is largely simple and unpretentious; every now and again (usually during repeated passages) we are treated to atmospheric shots of Fontfroid Abbey and the gorgeous surrounding countryside. The amount of the interspersions reminds me somewhat of the New Years Day producers although the season & countryside are very different!

The second DVD is a 50 minute long documentary in French (subtitled in French when a non-French speaker is interviewed) about the approach that Savall has adopted for the performance captured for this set. Some fascinating excerpts from the rehearsals show the both the good natured spirit in which this endeavour took shape as well as the minute care that Savall took over the rehearsals. Contributions are centred around the vocal protagonists but the main orchestral soloists (including the timpanist) also get their turn in the limelight.

The whole project is a work of love for Savall; it is a memorial for his recently departed wife Monserrat Figueras. To bring on a new generation of singers, Savall held an open competition for the 27 singers employed in this recording - no One Voice Per Part (OVPP) of Joshua Rifkin influence here! - Savall consciously chose young singers. The singers hail mainly from Latin Europe but include some from northern Europe too and a representative each from Israel, Japan and Venezuela. All the singers are uniformly excellent and it would not be a surprise to learn that solo the positions were decided by drawing lots!

To give a flavour of the performance is apposite to quote from the introduction to the set by Ariane de Rothschild: "In this recording Jordi Savall offers us an original interpretation of Bach's masterpiece. His quest for a dialogue between cultures and traditions has prompted the musicians of La Capella Reial de Catalunya to approach the score as a remarkable musical utopia... This powerful and sensitive recording enables us to discover anew a truly universal work." She is not alone in sharing those sentiments. At this point, I must lay cards on the table and declare that I have, for the past decade, been won over to OVPP in Bach (and the period in general). This performance has given me cause to rethink the whole debate entirely; the Crucifixus of the Credo is a wonderful example of the startling clarity that Savall's singers achieve.

The freshness of vocal timbre is easily audible and is reflected in the orchestral contributions as well; the flute solo of Marc Hantai in the Domine Deus Duetto (Gloria) just shines light forth from the speakers - it is a miracle of tonal balance. This one example is not a solitary instance of interpretative genius; throughout one hears very familiar music as if for the first time. The concertante contributions of Manfredo Kraemer (violin), Alessandro Pope (oboe d'amore), Thomas Muller (horn), Claude Wassmer (bassoon), Quim Guerra (bassoon) are no less distinguished and all get their rightful dues in the lavishly illustrated booklet. Considering that this is a (single) concert performance, the singing and instrumental contributions are astonishingly secure. Each of the soloists (Celine Scheen, Yetzabel Arias Fernandez, Pascal Bertin, Makoto Sakurada & Stephan MacLeod) sing with a radiant beauty that can rarely have been heard in this work (in both concert and on disc) - it is really very special indeed. As is the whole choral experience; one has to turn to John Eliot Gardiner's Monteverdi Choir for a choral experience that is as translucent as OVPP but with the richer, firmer tone of a multi-voiced choir.

The only thing that prevents this set from being able to state this is an outright "library choice" is the recording. As noted above, this is a recording of a single concert in an abbey. There are obvious resonance issues that the engineers have had to try and overcome; the way these have been overcome resulted in the bass end of the audible spectrum being reduced. One can hear that, for instance, the timpani contribution of Pedro Estevan would have sounded far louder to the audience than we are permitted to enjoy on disc (DVD & SACD alike). It is a great shame that a more favourable venue could not have been found for the SACD's because when Savall makes the textures shine so & pour forth light in this way, it is galling to know we cannot hear exactly what he envisaged and worked so hard to achieve (I'd estimate we hear around 95%). The bass reduction is the only criticism I have (audience noise is, during the music, impressively quiet and the transparency of textures is beyond criticism) and it should not, no *must* not, stop people from hearing a musical miracle of both composition and interpretation.

[NB - the sonic rating is my crude attempt to weigh up the many positives with the one negative aspect. I suppose I'm saying that the bass reduction bothers me a bit but nowhere enough to spoil my enjoyment of what was clearly a very, very special night.] 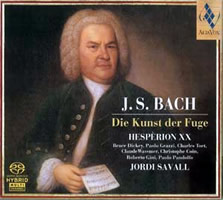 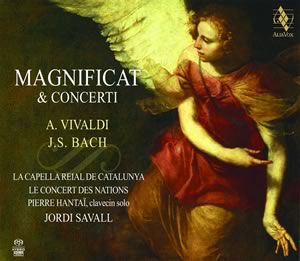 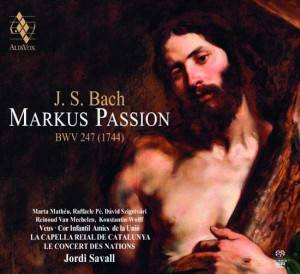