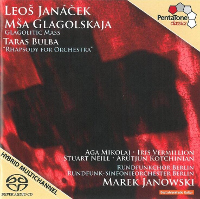 This is the first recording of Janacek's Glagolitic Mass to appear on SACD and for that reason alone it is most welcome. The Mass, stemming from the last decade of the composer's creative life was written at great speed in 1927 - though seeds for it were sown at least a year earlier. It is one of Janacek's most striking and original works, and although not a religious piece in the usual sense of the word, the Old Slavonic text that it uses is almost the same as that of the Latin Mass, but treated in an entirely different and radical manner. In 1928 Janacek said of this work “ I wanted to portray the nation's faith not on a religious basis but on a strong moral one which calls God to witness”.

Marek Janowski has chosen to record the original version of the Mass that was reconstructed by Paul Wingfield in 1994 and subsequently recorded by Charles Mackerras on a Chandos CD that same year. In Wingfield's version the simplifications and revisions that Janacek was forced to make due to lack of sufficient instrumental resources and the limitations of the original performers have been restored. These include the playing of 'Intrada' at both the beginning and end of the work, greater rhythmic complexity in the Introduction (Úvod), the off-stage clarinets and vehement timpani interjections in the central section of the 'Veruju' (Credo) and some extra bars of music in the 'Svet' (Sanctus). All of this should make the work even more thrilling and powerful for the listener than the standard version as recorded by such celebrated interpreters as Karel Ancerl, Rafael Kubelik and Simon Rattle. Janowski opens the work with great vigour and the festive fanfares promise much. However, as the work proceeds tempi become slower and the performance becomes less involving.

The singing of the Rundfunkchor, Berlin is excellent with clean attack and crisp enunciation of the text - a clear endorsement of the rigorous training from their chorus master Simon Halsey. The soloists, however, are rather variable. The fresh singing of Polish soprano Aga Mikolaj is most welcome and Stuart Neill certainly possesses the necessary heft for the taxing tenor part, but the woolly bass of Arutjun Kotchinian does not impress. The organ used throughout the main body of the work, but especially in the 'Veruju' section, sounds a very small and weedy instrument, so presumably that is why the important organ solo of the 'Varhany' (Postludium) was recorded separately on the organ of the Philharmonie, Berlin. The SACD booklet tells us that 'this organ solo is based on the original manuscript with corrections by the composer, thus differing slightly from the printed version. Iveta Apkalna performs this solo competently but rather unexcitingly.

The Berlin Radio Symphony Orchestra orchestra play with ravishing tone in the quieter sections of the Mass but their rich strings and fat weighty brass sound – ideal in Wagner – soon makes one yearn for the more bracing and astringent timbre that some orchestras bring to Janaceck's music.
The recording engineer (Everett Porter) balances choir, orchestra and soloists with great skill – not an easy task in this work, but the timpani outbursts in the 'Veruju' lack crispness. Inexplicably the four soloists appear to be grouped more to the right hand side of the orchestra rather than spaced evenly across the stage.

The criticisms directed at some aspects of Janowski's performance of the 'Glagolitic Mass' are equally applicable to his account of the Rhapsody for Orchestra 'Taras Bulba' . The orchestral playing here is sumptuous and weighty, especially in the first section 'The Death of Andrei' and his moderate tempi for each of the Rhapsody's three sections are appropriate, but the music is clothed in a Straussian plushness that lacks the essential bite for Janaceck's unique sound world. The limitation of the organ used here manifests itself again - its absence of deep low frequencies result in the majestic apotheosis that ends the work lacking the grandeur found elsewhere.

Sadly existing recommendations on CD are not supplanted by this release.