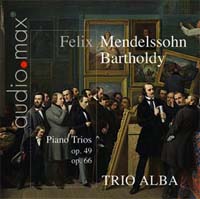 Another wonderful disc of these ever-delightful piano trios.

Compared to Mendelssohn: Piano Trios - Fischer, Gilad, Müller-Schott, this account might uncharitably be said to lack "personality" or, more accurately, "personalities". That is not to say that the performances are at all under-characterised or bland; no, these are homespun and more collegiate in nature. The sonata form first movements are almost identical in timings; this is not where the difference lies. It is more the greater expressive contrasts that the trio of "stars" on PentaTone bring to the score that marks out their performance. Throughout, Trio Alba are more content to let the music speak for itself; many will enjoy this more self-effacing approach (for all the glamour and passion that Fischer & friends bring, it can sound over-bearing).

A clear contrast too, is in the pacing of the slow movements. In both trio's, Trio Alba take a markedly more HIP-informed briskness to the music, eschewing the heart-on-the-sleeve approach that is more often heard from other ensembles. I enjoy both approaches and were it not for the sensational thrills that Fischer & friends bring in the scherzo's & finale's, I think that this less (overly to some ears) sentimental playing alone could be a deciding factor for many. That said, both the scherzo's and finale's in both trio's are played at a lower temperature by Trio Alba and this will I suspect, as it has for me, just prevented Trio Alba from capturing the library shelf position from Fischer and friends. Where the self-effacing nature of their playing was refreshing in the slow movements, the lack of a commanding presence that steers the music in what can otherwise appear as mere virtuoso exercises can be a hindrance in more motific music; the longer line is not so apparent and the attention of the listener is more prone to wandering.

The sound from MDG is as good as any from the label. Direct comparisons suggest that, like their playing, the sound is somewhat more laid back than the PentaTone competitor (not helping the more subtle expressive interpretation but not hindering it either).

Recommended if the marvellous Fischer/Gilad/Muller-Schott performance is too intense.