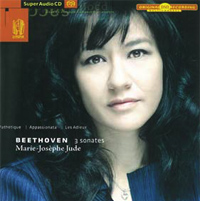 A reasonable recital of three wonderful sonatas that is fatally flawed for multi-channel listeners.

Marie-Josèphe Jude possesses a very fine technique which she devotes to Beethoven's aide, or at least a rather Romantic viewpoint of the works. The slow movement of the Pathetique in particular is sung in a way that is not often heard these days and the Sturm und Drang elements of the outer movements are far more restrained than the fireworks that Brautigam and other HIP advocates now bring to such music. Some listeners revel in the extra drama, others are repelled - you pays your money & takes your listening experience.

In the Appassionata sonata however, Jude lets herself have a much wider range of expression and matches more closely the volatility of the music. Indeed, her approach is not far off that of Brautigam but with obvious differences in pedalling etc that are necessitated by the differing decays of a modern vs "old" piano. The slow movement is taken at a very flowing speed and will, like many period or HIP accounts, sound radically different in conception to the past masters like Gilels. Similar considerations apply to Les Adieux and unless one is dead set on having an account that mimics the past masters on the one hand or period performance like Brautigam, this will surely appeal.

The sound of this Lyrinx disc is one of the best offerings from the label. Rather than recorded in concert, in a rather dry concert hall, these are studio offerings recorded in a wonderful church. Beautiful sound of beautiful playing indeed.

Warning to MCH listeners: on every player I have tried this disc on, the MCH layer at 1'55 either "freezes" the player (with a particularly unpleasant sound emitted briefly from the speakers) or jumps to track 2; this effects the first movement of the Pathetique sonata. Most regretful, as the sound is otherwise every bit in keeping with the quality of the playing. As things stand though, it is quite impossible to recommend this disc.

I have tried to contact Lyrinx which is difficult as their website doesn't even list an email address or contact form; attempts via their FB page have not met with any success. Mercifully this issue doesn't apply to the stereo layer.