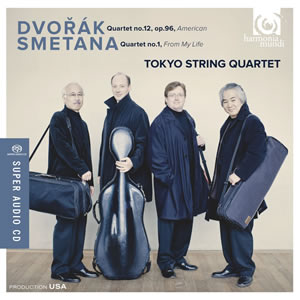 
In its valedictory release, the world-renowned Tokyo String Quartet presents a pair of well loved chamber works offering a glimpse into the private world of two Czech composers. Antonín DvoÅ™ák and BedÅ™ich Smetana – although they were sometimes regarded as musical opposites in their homeland – together came to represent the quintessential sound of 19th-century Czech music.

Recorded in February 2006 at the Richard B. Fisher Center for the Performing Arts, Bard College, Annandale-on-Hudson, New York.

A valedictory release of considerable stature from the Tokyo String Quartet.

For such a stalwart of the quartet repertoire, it is almost unimaginable that this disc features the first made-for-SACD recording of the American quartet in its normal guise. That it comes on the Tokyo String Quartets departure from the recording studio is sad but one can gain comfort that this account is laced with a wistful poetry. Tempo choices are conventional; never do they drag nor do they push. Rather than sounding like the studio account that it is, the manner and charm of the playing is more akin to them playing for one at the listeners home. Careful balancing allows one to hear every note and whilst their playing is far from boring, the Tokyo players never indulge in expressive point making that distracts from the bigger picture of each movement and the whole quartet.

Every nuanced tempo change happens with a deceptive ease that belies the careful consideration that must happen for such fluctuations to happen organically. Some might prefer the finale to be played with a smidgen more vigour and outright pace but the whole presentation of this quartet is to play it as echt-chamber music, not a symphony for reduced forces. A case in point is the opening viola solo - where some conspicuously grab the attention, Kazuhide Isomura is in no way strident of phrasing or tone. His colleagues are of the same mentality and this must be one of the most self-effacingly beautiful accounts set down on disc. In exactly the same way, the sorrowful songs of Martin Beaver & Clive Greensmith (and to some extent Kikuei Ikeda) in the second movement are poignant in no small part due to their refusal to engage in histrionics. In short, this performance is 26'40 of pure, unalloyed joy. Joy that is aided by no small measure thanks to the wonderful recording; the silences are crucial in the Smetana and in both works the dynamic range afforded to the Tokyo players is rarely heard in chamber music.

In the Smetana, the Tokyo players are naturally more overtly emotionally engaged in the musical material. Unlike some accounts I have heard on disc and in the concert hall, there is no sacrificing tone or intonation in the name of expression. Coming straight after the Dvorak (even with the respectful pause granted by Harmonia Mundi), the attack on the opening chord comes as something of a shock in its vehemence. The relaxation of mood for the second subject though is glorious and like the Dvorak before, is treated to a wonderfully relaxed lyricism. The dark, disturbed mood of the opening is never far away though and the players manage to convey this incessant gnawing with conviction.

The second movement contains superficially happy, carefree music. Under the hands though there are some tremendous challenges which, if accepted, make intonation very difficult - a challenge that is both accepted and conquered by the Tokyo players. Indeed, they manage to successfully link this quartet to the Dvorak quartet in timbre and genial outlook such is their entirely self-effacing virtuosity.

The playing of the emotional core of the work, the Largo sostenuto, is key to the success of an account. Despite the freely rhapsodic material that opens the movement, each instrument joins the musical argument as naturally as breathing building climaxes of real strength both within their own lines and the paragraph as a whole. Their treatment of the rests & pauses in the centre of the movement is a masterclass in how powerful a silence can sound; the following elegy is all the more poignant.

This work is a perfect piece to call time on a recording career for one can hear traits from all the great preceding quartet composers in both Smetana's score but when one of these movements arrives, one can also hear the Tokyo players alter their timbre to also tip their hat suitably. In the finale, Smetana ambitiously invokes Mendelssohn's octet(!) amongst other works and it is to the credit of the Tokyo quartet that they convey such a daring gambit with aplomb. After a final dose of troubled rhapsodising, the music dwindles wistfully away into nothingness done to perfection in these hands; make no mistake though, the Tokyo String Quartet go out in a blaze of glory with this disc.