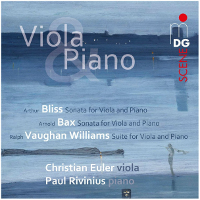 
Paternal Pride
Lionel Tertis is regarded as “the father of the viola.” Although he was not its inventor, he was the first musician to concertize internationally as a soloist on this marvelously multifaceted instrument and to inspire leading composers to produce music for it. While retracing this violist’s path, Christian Euler chanced on three English compositions by Bliss, Bax, and Vaughan Williams and is now presenting these rediscoveries with the pianist Paul Rivinius. The works could not be more different and display the viola’s overwhelming potential in all its great breadth.

From Rags ...
Commenting on Tertis, Arthur Bliss once stated that his influence led to the crowning of this Cinderella of instruments as a princess, and in his sonata Bliss gave the viola the full royal treatment: opulent melodic lines, racing runs, and extreme registers require the highest virtuosity and the greatest adaptability. We are thus not surprised to learn that he composed his viola sonata in close collaboration with the virtuoso in 1933. The listener gains access to expressive regions never before imagined by her or him, and Christian Euler’s energetic playing fully explores this new terrain.

... to Riches
The sonata composed by Arnold Bax in 1921 displays the outstanding tonal qualities of the viola with special vividness. The two elegantly reflective movements are framed by a fiery scherzo and offer the instrument the opportunity to shine in its full tonal glory. The pentatonic beginning pointing to old Celtic melodies immediately transports the listener into a fascinating late-romantic world. Sophisticated humor of course stamps the suite by Ralph Vaughan William from 1934. Its eight parts play with pseudo-baroque allusions, a strangely melodic “Polka mélancholique” and a “Moto perpetuo” are heard, and an exuberant, sparkling “Galop” forms the original furioso conclusion.

Fraternal Feast
Christian Euler performed as a violist in the New York Philharmonic and Philadelphia Orchestra under the world’s leading conductors prior to being appointed to a professorship in Graz in 1991. We know Paul Rivinius from many chamber ensembles, and in 1998 he won the ARD Competition with the Clemente Trio. The pleasure taken by these two soloists in these subtly ironic musical treats manifests itself at every turn and is enhanced in a special way on this three-dimensional SACD recording. 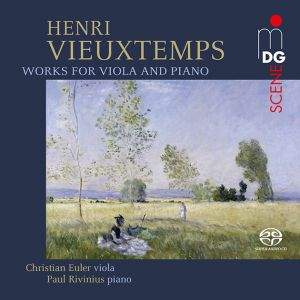