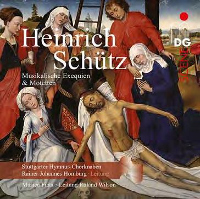 
Legendary Magnificence
The court of the Venetian Doges was of legendary magnificence. Princes who desired some of this splendor for their own courts sent their artists and musicians to study in La Serenissima. And so it was that Heinrich Schütz made his way to the Lagoon City in order to learn his trade under the famous Giovanni Gabrieli. This new SACD by the Hymnus Choirboys of Stuttgart and Musica Fiata demonstrates how Schütz worked with opulent Italian impressions while serving as court chapel master in Dresden and employs the finest 2+2+2 technique to transport lavish sound and Venetian grandezza straight to you in your living room.

Laudatory Opulence
Four five-part choirs situated in different places in the performance space and varying in membership present this CD’s repertoire discovery: the “Song of the Three Youths in the Fiery Furnace,” a mighty song of praise based on the prophet Daniel. There are shifts between favorito choir and chapel choir and between instruments and singers and along with them an ostinato bass part, so that the praise of God is celebrated in many colors and with magnificent splendor while being repeated many times and undergoes marvelous intensification on its way to a powerful concluding segment.

Revealing Substance
The Musikalische Exequien are also pervaded by the deepest religiosity and were composed on the occasion of a princely funeral. Here Schütz develops his full compositional mastery, in the old and new styles: from the traditional motet through the concerto with thorough-bass accompaniment to the very up-todate opera, Schütz had a command of all the genres of the vocal music of his times – and so compellingly employed them that he published the piece initially functioning as a rather chance occasional work under its own opus number.

Rewarding Performance
Schütz’s music is in very good hands with the Hymnus Choirboys of Stuttgart and its young soloists. This traditional ensemble led by Rainer Johannes Homburg, a proven expert in early music and historical performance practice, is complemented by Musica Fiata on historical instruments with such “parlando” articulation that the listener may have the impression that he or she understands every word, even in the purely instrumental presentation of the motet “Das ist je gewisslich war.” Cornetts and trombones with works by Johann Hermann Schein and Hans Hake round out the solemnities and festivities forming this magnificent program.

First, the good points. The musical direction has a pace that sets itself apart from Schütz: Musikalische Exequien - Rademann without ever becoming breathless in the main piece of this disc (the Musikalische Exequien); the rest of the programme is similarly well suited to the genre and stylistically there is much to be admired. In particular the contributions of Musica Fiata are good, coming into their own in the instrumental only Motets. So too do the solo vocal contributions from Stuttgarter Hymnus-Chorknaben, these talents will surely grace professional choirs (if not venture into soloists in their own right) in the future. However, and this is a terrible shame, the quality of the choral singing en masse reveals that the Stuttgarter Hymnus-Chorknaben does not have good strength-in-depth. The tuning, as in Machet die Tore weit (Christmas Choral Music) - Homburg, is woeful on far too many occassions - the choir indulges in very many microtones of each notated chord & it is not pleasant, even on just the first listen, let alone on repeated occassions. The Carus disc shows exactly how beautiful this music can (and should) sound; the contrast between the intonation of the soloists & the chorus here painfully underlines the issue.

The sound is good but nowhere near outstanding enough a claim to outweigh the huge musical drawbacks.

Very sadly disappointing as, if the choir were more restrained in number, it sounds as if the results could have been far more enjoyable.