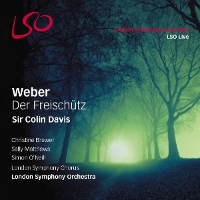 
Weber's eerily fantastical Der Freischütz is heralded as one of the cornerstones of Romantic opera, being the first in operatic history to draw on traditional German folk tunes and elements of Romanticism. The evocative and colourful orchestration of the 'Wolf's Glen' scene, the most gruesomely expressive rendering of evil ever found in a musical score, is particularly impressive. Much of the music is instantly familiar: several of the melodies have been adapted as hymn tunes, and the Overture regularly appears in the concert hall.

This recording marks Sir Colin Davis' swansong from opera but the timing of the release is such that the accompanying material does not reflect this fact.

Perhaps fittingly, this account from Sir Colin Davis sounds as if from another age and certainly the sheer scale and power of his reading pays no attention to HIP whatsoever; for some, this will mark it out-of-bounds but as someone who greatly enjoys HIP, there are still many moments of enormous satisfaction around some glaring un-reconstructed tempos! The opening of the overture is menacing and the breadth that Davis imbues it is suggested by the timing of 10'38 (Harnoncourt in his recording with the BPO takes 9'53 and on Weber: Overtures - Kantorow Kantorow takes 8'36). The expansive approach of Davis pays dividends at the more dramatic moments of the score, meaning that the Wolf glen's scene is eerily tense. The contribution of the London Symphony Chorus is gutsy but partly because of the tempo choices, partly because of their number, the clarity is not of the same standard obtained in Dresden (Kleiber) or Berlin (Harnoncourt).

The flip side of Davis' broad tempo choices are though that some tempos are seriously on the slow side of traditional practice. Naturally, this has a damaging impact on the quality of the singing – all the main protagonists are taxed beyond their comfort zone and this is not appealing on repeated listening. The most obvious example of Davis' largesse is that before the “Scene, Walzer und Arie” in Act I. The prior dialogue tees up a scene of dancing & revelry but a first time listener would never imagine that from the tempo adopted here. Sir Colin Davis' Haydn with the RCO was widely praised at the time, although the tempos for the Menuet's sound rather staid today, and if he could have heard this later rendition, he would surely have offered polite criticism to his future self for this is an outrageously slow tempo that has as much to do with a waltz as ice cream has with freezing in an oven.

A further decision by LSO Live was to not include (as presumably this was omitted in the concert performances) any of the spoken dialogue between numbers. Some may welcome this but to those who have a reasonable amount of German, the lack of the action will be a great disappointment and for a newcomer will make for a strange experience where the mood changes without any explanation without flipping between the English/German libretto and the synopsis – hardly satisfactory.

The sound is good for the Barbican but still not approaching that of a truly magnificent modern concert hall.

A most perplexing and ultimately, sad operatic memento for Sir Colin; my fervent hope is that (at least one) further symphonic recording will be issued to provide a more fitting memorial to a long & distinguished career. Oh for Kleiber's or Harnoncourt's accounts to make it onto SACD...

Sonically this album is a wonder. Recorded in DSD at Barbican Hall the spacious multichannel recording captured just perfectly the atmosphere of the hall. So much inner details from the score as well as pleasant shimmer from the rear speakers! In the Wolf's Glen scene the voice of Zamiel can be heard from the right surround speaker effectively. The problematic acoustics of Barbican made me think how well the engineers have managed to solve this disadvantage. Demo stuff, definitely.

But the performance was a great disappointment. Having listened to this several times I found Davis's tempo choices featureless and boring. Actually compared to his earlier recording of the opera with Staatskapelle Dresden (Decca Classics) the speeds were slowed down even more. The grand old man wasn't at the peak of his powers and this came clear during the listening session. Overture and the mentioned Wolf's Glen scene were regrettably the only positive things what I found. I was used to Carlos Kleiber's fiery and spellbinding approach (Deutsche Grammophon) and therefore this came as a shock for me.

It's interesting fact that Kleiber and his forces were captured for multichannel tapes back then. According to Emil Berliner Studios "Der Freischutz" was the first 8-channel opera production. However, this intermediate surround sound mix has never been released as such, only mixed down to stereo. Let's hope that PENTATONE will release this in their magnificent Remastered Classics series before it's too late.