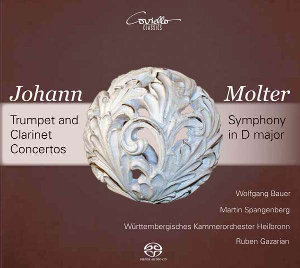 
Most of the surviving instrumental works of Johann Molter date from his second period in Karlsruhe and show transition from late Baroque to early Classical or to the “Mannheim school”, as can already be seen in the way Johann Molter largely eschews the contrapuntal techniques that, given his background and education, he must have known well. Other pointers include his preference for simple, generally short-phrased melody and plain but not primitive harmony and the demotion of the harpsichord from its status as continuo instrument.

Formally, Molter remains fairly conventional: all the works on this CD display the same three-part sonata layout, realized with refreshing conciseness and brevity. The composer links his Italian-inspired techniques of string playing and formal shaping with the special features of the French styles (interesting rhythmic patterns, occasional chromatic “clouding” and unexpected modulations into the minor, as in the third movement of his first clarinet concerto).

The trumpet concertos on this CD, embodying “the last days of the high courtly art of clarino playing” (Wolfgang Bauer) and brilliantly exploiting all the resources of those extremely high valveless trumpets, have much in common with his clarinet concertos in the way they interpret the music, down to their closing flourishes at the ends of movements; nor is this coincidental. The clarinet – in this case the D clarinet, sharing only the uppermost regions of the later B flat and A clarinets – is strictly speaking a “little clarino”, a small and very high trumpet. In the slow movements, however, there is evidence of the soon-to-be-prevalent wistfully lyrical character of the new instrument, especially beloved of Mozart and the Romantic composers from Weber to Reger.