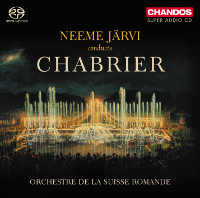 
This album of popular works by Emmanuel Chabrier marks the beginning of a new series of French repertoire, performed by the Orchestre de la Suisse Romande under its newly appointed Artistic Director, Neeme Järvi.

After three attempts at comic opera, Chabrier finally achieved success in 1877 with L’Étoile, the plotline of which is set in the court of the somewhat emotionally unstable King Ouf. A couple of years previously, Chabrier had written a short Lamento for orchestra, a work which would not perhaps be considered revolutionary by today’s audiences, but which caused the committee of the Société nationale de musique to hum and haw over it for eighteen long months before finally letting it loose on the Parisian public in 1878.

From July to December 1882, Chabrier took his family on an extended holiday to Spain, during which he kept himself busy by noting down the Spanish folk tunes and dance rhythms he encountered on his way. He put many of them into his orchestral masterpiece España, a work overwhelming in its orchestral colour, which is such a characteristic feature of this composer. The impressions of his Spanish holiday can also be heard in the Habanera.

For six years Chabrier worked on Gwendoline, a two-act dramatic opera on a libretto by Catulle Mendès, set in Britain in what he called ‘barbarous times’. Inspired by Wagner and Berlioz, the Overture sets the scene perfectly for a drama of violence, treachery, and passion. A month after Gwendoline was premiered in Brussels in April 1886 the Opéra-Comique in Paris agreed to put on Chabrier’s next opera, Le Roi malgré lui, a melting pot of complex political intrigue, cheerful arias, and vivacious dances.

In 1880 Chabrier had written his Dix Pièces pittoresques for piano, and over the next few years he orchestrated four of them to form the Suite pastorale, with its gently pulsing ‘Idylle’ movement (which inspired Poulenc to become a composer), the raucous ‘Danse villageoise’, the sultry ‘Sous-bois’, and last but not least the sunny, high-spirited ‘Scherzo-valse’.

Also on this release is the Joyeuse marche, one of Chabrier’s most popular works, and the Bourrée fantasque, based on a dance from the Auvergne region in France where the composer had spent his childhood.

This SACD is a real winner!

All the favourites are here, España, Suite pastorale, Bourrée fantasque, Joyeuse marche, Habanera etc., but as so often with Jävi, the maestro has unearthed a couple of entrancing rarities to complete this generous Chabrier programme.

The first of these is the lovely 'Lamento for Orchestra' that dates from 1874. This richly scored and deeply felt piece features a haunting cor anglais solo – sensitively performed here by Alexandre Emard. The second rarity, the overture and two entr'actes from Chabrier's comic opera 'L'Etoile'', make a 'mini-suite' that gives a flavour of both the opera's hijinks as well as its more tender moments.

The Orchestre de la Suisse Romande play for their recently appointed Music Director with the appropriate Gallic flare and affection that this music deserves. Their performance of the magnificent overture to Chabrier's opera 'Gwendoline' is especially thrilling.

Occasionally one misses a little of the lilt, charm and insouciance that Beecham and especially Paray – whose 1960 recordings still sound wonderful, Chabrier: Espana, Rhapsody, Bourree - Paray – bring to this music, but this is more than compensated for by the sheer ebullience of Järvi's accounts reproduced in such captivating sound.

The Chandos 5.0 24-bit/96kHz recording does full justice to the performances. The sound stage is wide and deep, my only caveat being that amongst the colourful percussion the triangle is a little too recessed – though happily the bass drum in España definitely is not.