Yes: Going For The One 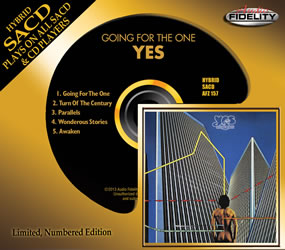 Going for the One marked Rick Wakeman's return to the band and also a return to shorter song forms...after constructing epic tracks for the last few years, Yes felt inspired to scale things back a bit and recorded some of their most direct and concise material since Fragile. In many ways, this disc could be seen as the follow-up to Fragile. Its five tracks still retain mystical, abstract lyrical images, and the music is grand and melodic, the vocal harmonies perfectly balanced by the stinging guitar work of Steve Howe, Wakeman's keyboards, and the solid rhythms of Alan White and Chris Squire. The title track features Howe on steel guitar. "Turn of the Century" and the album's single, "Wonderous Stories," are lovely ballads the way only Yes can do them. "Parallels" is the album's big, pompous song, so well done that in later years the band opened concerts with it.

Wakeman also varied his sound by using the new polyphonic synthesizer the Polymoog and using church pipe organ on "Parallels" and the extended track, "Awaken." Wakeman's stately church organ, recorded at St. Martin's Church, Vevey, Switzerland, sets the tone for this "Roundabout"-ish track. The concluding "Awaken" is the album's nod to the extended suite. Jon Anderson and Squire are dead-on vocally.

Jon Anderson has said of the song "Awaken", "We had a hit record! I loved listening to 'Awaken', at last we had created a Masterwork" and has indicated in some interviews that he considers it to be Yes's most complete composition.

I love this album despite it's meh mastering, but I don't share people's love for this SACD version. It sounds muddy, murky, muffled and less dynamic than both the original 1980s CD release and the later digital releases, and in fact looking at the waveform and dynamic range numbers confirms that the SACD layer is less dynamic than both - not to mention that the SACD is apparently upsampled from 44.1k PCM, as there is nothing but noise above that range in the DSD, in contrast to other DSD masterings.

If you want an older, quieter mastering, the original CD is audibly and measurably better and more dynamic. If you want a newer, louder mastering and care about capturing the full dynamic range you can't hear, the 192khz PCM digital release is technically superior as musical content is captured well beyond the CD range, and it also sounds excellent to me.

I think this is a case of older ears fetishizing vinyl-style masterings that artificially veil the sound - there is simply no metric by which this SACD is the most accurate or dynamic digital version of this album, and it's simply not worth the price it goes for on the secondary market. 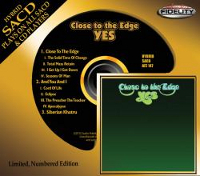