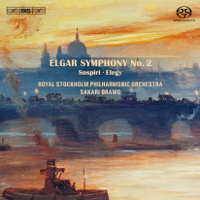 
The collaboration between BIS and the Royal Stockholm Philharmonic Orchestra (RSPO) began some 30 years ago, and has resulted in a number of discs conducted by such distinguished musicians as Antal Doráti, Yuri Ahronovitch and Alan Gilbert, all past chief conductors of the orchestra.

As the present principal conductor, Sakari Oramo now conducts the RSPO on a BIS recording, he has chosen works by Edward Elgar, a composer whose music he has been a fervent advocate of since his tenure at the City of Birmingham Symphony Orchestra. In particular he is fascinated by Elgar’s orchestration technique: ‘Elgar's orchestrations breathe, reflect and ripple, transporting the music in majestic waves unlike anybody else’s. He applied his technique as precisely as Richard Strauss, but also allowed himself to be carried away, to feel every colour and shade.’

Sakari Oramo’s commitment to Elgar has been rewarded by a medal from the British Elgar Society, and his interpretations have met with great acclaim in the composer’s own country. The main work on the present disc is the Second Symphony – a darkly hued, powerful work lasting almost an hour. The composer apparently planned to dedicate it to King Edward VII as ‘a loyal tribute’, but the monarch’s sudden death in May 1910, led to the symphony being inscribed instead to his memory.

Composed during the same years as the symphony, the two companion pieces on the disc also have a melancholy tinge: Elegy for strings, and Sospiri (‘sighs’) for strings, harp and organ.

For many of his fans, Elgar's Symphony no. 2 is his signature work. Its key performance is that of Elgar himself, probably the first composer to systematically use the fast-developing recording systems of his time to preserve a legacy of his art, realized by the finest orchestra of his day and captured by the fledgling EMI. He made it clear, however, that his aim was not to have successor conductors copy the recorded performance. He himself continued to experiment in realizing his scores, so that no two performances of each work were the same.

Elgar's 1927 electrical recording of Symphony no. 2 was uncut, and compared with his previous acoustic one, a full orchestra was used, with the LSO strings at 16/14/10/10/4, both tuba parts, both harp parts, and three percussionists. The only un-scored addition was an extra reinforcing contrabassoon on the double bass part.

The characteristics of these recordings reflect the performance practices of the period. Quick movements are faster than we are accustomed now (the notion that conductors speeded up in order to make the short record sides has been fully discounted); tempos are generally much less steady then now expected, and there may be a great many fluctuations in a designated tempo. Vibrato, particularly in the strings, is much less than used now, and continuous string vibrato was not applied. Portamento,(swooping up or down between notes for an emotional effect), however, was a common feature.

Elgar's recorded performance of his Symphony no. 2 abounds with energy and spirit, inset with those characteristic interpolations of spectral, drawn-out and hushed twilight moments suggesting poignant recollections - these still tug the heart-strings. For the purpose of this review, I listened to, and compared, each movement of the symphony in the order of Elgar's, Oramo's and Hickox's recordings. Ashkenazy's SA-CD was rejected from the exercise for the reasons stated in my review (Elgar: Symphony No. 2 - Ashkenazy).

As a byline, regarding movement timings I found it interesting to compile a table of these for the three recordings noted above, and added a select group of RBCD recordings regarded as perennial favourites (appendix below). Elgar is much the fastest overall, with Solti (who studied Elgar's recording of Symphony 1 for his own recording of that work and thus understood Elgar's style) and Boult (who attended Elgar's live concerts) close behind. The rest of the conductors, mostly in the next generation, were slower, up to more than 4 minutes in the first movement. Only Barbirolli, after his elongated first movement, was close to Elgar's time for the slow movement. All the conductors were very close to Elgar's timing for the Rondo third movement!

Overall, Oramo and his fine orchestra emulate Elgar's volatile changes of mood and subtle tempo changes with a propulsive sweep which grips attention in each movement. Oramo has an impulsiveness close to Solti's (and Elgar's) in his rubato, making up for a generally expansive overall timing. Fine dynamic control places the crescendos superbly, and the poetry of Elgar's other worldly moments of hushed contemplation are most touchingly realized. Oramo also encourages some emotive downward string portamenti in movements 1,2 & 3, where phrases are descending from a climax, just as Elgar does. I didn't register any portamenti from Hickox. Articulation is notably clearer on the strings under Oramo's baton, while Hickox seems to prefer a smoother style. Clean articulation is very evident in Elgar's recording, even for the brass. Side by side, Hickox's interpretation seems cooler, more relaxed and with less contrast and fire, despite many virtues. Dare I say it seems more reserved?

Part of the difference between Oramo and Hickox lies in their respective recording qualities. The Chandos is distant, and even greatly raising the volume doesn't really tame that, certainly in multichannel. The BIS sound, on the other hand, has a thrilling presence, without multi-mic artifacts. A slightly dry Stockholm Concert Hall seems to be a factor here. On first hearing, I was disappointed by this; checking the rear channels which have a reverb signal from the back of the hall which sounds improbably distant. I recall that this low rear reflection featured even more strongly with the Exton recordings of Sibelius in the same hall. A touch more ambience around the orchestra might have made the front to back perspective even more clearly focused.

A second listening with more volume convinced me of the integrity and accuracy of the orchestral portrayal, and the remarkable orchestral colouring which Oramo "releases" from the score with his meticulous inner balancing. My only regret is that the two harp parts are only intermittently audible. This is a pity, as Elgar's writing for them was very progressive and complex, with much interaction between them. They are only marginally more audible in the Hickox recording, but you can hear them quite well under Elgar's baton, despite the age of the recording.

Oramo introduces another matter of orchestration. In a lecture, Sir Adrian Boult mentioned that Elgar had come to use an organ at the last big climax of the finale in his own performances (no organ part is marked in the Novello score). He would add a 32' or 64' pedal for a few bars from the 8th bar after cue 165. This is clearly audible at 11'47 in Track 4 and is a thrilling addition to the climax.

As in a number of other recordings of the Second Symphony, the fill-ups are two short pieces for strings (a brilliant writer for strings, Elgar wrote only these apart from the masterpiece of 'Introduction and Allegro for Strings'). 'Sospiri' ("Sigh") for strings, harp and organ is deeply expressive and has a glorious melody. I usually turn to Barbirolli's version for this (timing 5:10), but Oramo and his strings provide an intuitive simplicity which eschews the possibility of over-sweetness (timing 3:50). 'Elegy' for strings alone (a short dirge for the funeral of a member of London's Worshipful Company of Musicians) is also beautifully done, in a time very close to Barbirolli's in this case.

For the booklet, BIS have gone to the trouble of inviting John Pickard, General Editor of the Elgar Complete Edition, and a composer in his own right. His wide-ranging notes reveal much up to date information about the genesis and context of the symphony, which are most helpful. One also has to admire the fine cover art, a painting of 'St Paul's from the River' by George Hyde Pownall, an oil painter from Elgar's time. It suggests the great changes which were taking place in the years before the First World War, of which Elgar was well aware. The symphony crystallizes his thoughts about the world that once was.

This new Elgar Symphony 2 is very impressive; in its volatile, high-contrast and penetrating sweep, and also for the fine playing of the RSPO. In recording quality it outclasses the SA-CD companions of Ashkenazy and Hickox. In terms of interpretation, it easily compares to the best in the selected RBCD recordings whose timings are listed below. Highly recommended; an alternative choice of performance type to the typical English ones. Given the renown of his 'Dream of Gerontius' while leading the Birmingham Symphony orchestra, it would seem that Oramo has an empathy for Elgar. 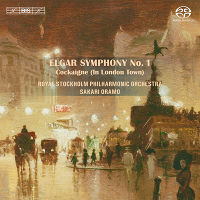