No smoking gun Kveld-Ulfr, just tea leaves.... The original JSACD disc that I have (Issued 2011) the jacket discloses : "DSD Transferred from analogue master tapes by Manabu ...

The release is available today and I downloaded the multichannel version from "Native DSD" in the original recording format, DSD 256. As an aside, I had a discussion with ... 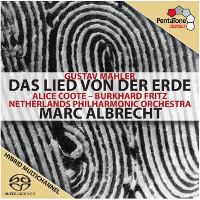 This is Marc Albrecht's first recording with the Netherlands Philharmonic Orchestra since he became their chief conductor in 2011. He is also musical director of the Netherlands Opera, and the benefits of his wide experience working with singers in the field of opera as well as in the concert hall are apparent in this fine new recording of Mahler's 'Das Lied von der Erde'.

Albrecht opens the first song ' Das Trinklied vom Jammer der Erde', a bitter and epicurean drinking song, with considerable vehemence and drive, though some listeners may be disturbed by his exhortations to the orchestra both here and in other climactic moments later in the work. The soloist is the tenor Burkhard Fritz whose vocal heft is definitely equal to the demands of this challenging movement. He does not possess the honeyed tones of say Fritz Wunderlich, but he sings intelligently and is certainly the equal of most tenors heard on disc in this taxing song. He scales his ringing Heldentenor down appropriately for 'Von der Jugend' and delivers 'Der Trunkene im Fruhling' with forceful directness. Perhaps the only thing missing is a little more light and shade in his singing.

What however makes this new recording special are the wonderful performances of the three movements that make up the major part of the work by the British mezzo-soprano Alice Coote. The ineffable sadness of 'Der Einsame im Herbst' has rarely been as well conveyed as here. Coote's beautifully clear and unforced singing is matched by a meticulous observance of Mahler's directions in the score and she brings a rapt introspective quality to this song that is matched by Albrecht's flowing accompaniment.

Coote sings the first two verses of 'Von der Schönheit' with a fragile delicacy, while Albrecht elicits finespun orchestral playing from the Netherlands Philharmonic Orchestra. The thrilling central section sounds magnificent in PentaTone's powerful recording, and Coote shows that her voice can easily ride the full orchestral storm without any sense of strain.

The biggest challenge for any soloist, of course, comes in 'Der Abschied' – the work's final movement that lasts almost half an hour and is punctuated with both poignant and terrifyingly black orchestral passages. Coote's rapturous singing throughout has an intensity that not only conveys to the listener the sense of deep sadness and loss implicit in the music, but also the serenity and peace of its final pages. The range,warmth and absolute control of her vocal resources are astonishing and I found this to be one of the most deeply moving accounts of this music that I have heard.

Marc Albrecht's tempi are uncontroversial and markedly well chosen in all six movements, as indicated by the timings listed below:

The excellent quality of the Netherlands Philharmonic Orchestra's playing is manifest, not only as a corporate body but also in the many individual instrumental solos that Mahler affords them in this work.

PentaTone's 5.0 DSD recording took place in the spacious acoustic of the orchestra's home, the Yakult hall in the Beurs van Berlage, Amsterdam in June 2012 The sound achieved by engineer Jean-Marie Geijsen is sumptuous and warm, in the usual Polyhymnia manner, rather than being too overtly analytical and detailed.

This compelling performance is a marvellous addition to the considerable discography of what is arguably Mahler's greatest work; one that I would, unhesitatingly, place at the top of those that have appeared in recent years.

In 2008 I attended a performance conducted by Marc Albrecht at Netherlands Opera of »Die Frau ohne Schatten« by Richard Strauss. I was so impressed by Albrecht that I’ve followed his career ever since and was delighted by his quite individual account of this Mahler masterpiece. Visitors to your site may also like to read the review by Gavin Plumley (Vice President of the UK Mahler Society) on http://entartetemusik.blogspot.co.uk/2013/05/tenacious-goodbyes.html 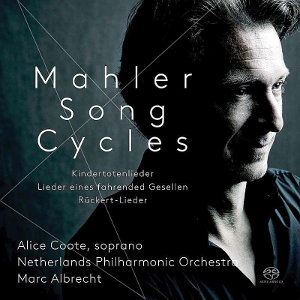