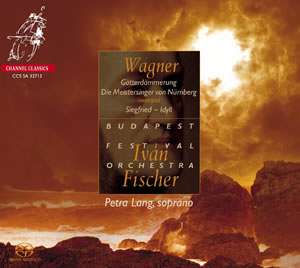 
Wagner is the giant among composers because he created his own world. Whereas others interpreted ancient and familiar mythology, Wagner created his own myth. Whereas others composed to librettos by poets, Wagner wrote his own texts. He even built his own opera house, which had to be different and innovative. Wagner was the greatest creative genius of music history.

And yet this superhuman giant also had a sense of humour, clearly audible in the wonderfully constructed Meistersinger Overture. And he had intimate, sensitive lyricism, which moves us deeply in his Siegfried-Idyll. This lyricism is the most important aspect of Wagner’s music; Brunnhilde’s beautiful, longing melody which shines through the huge flame that absorbs her and the collapsing world.

Performances of the music of Richard Wagner will for many be associated with Iván Fischer's elder brother Adam who has conducted complete Ring cycles at Bayreuth and in Budapest. Those, however, who follow the concert schedules of Iván Fischer and his phenomenally hard working Budapest Festival Orchestra will know that they have performed the Wagner programme featured on this SACD – or variations on it - to great acclaim in many of the major European cities over the past couple of years.

The expansive and warmly phrased performance of the 'Prelude to 'Die Meistersinger von Nürnberg' perfectly illustrates not only the rich corporate sound of this orchestra but also the distinctive character of each of its sections. Thanks to Channel's superb recording we can relish the piquancy of the Budapest woodwind, the smoothness of the strings and especially the bite of the brass.
Fischer's seating of the orchestra with violins to the left and right of the podium also brings its rewards in ensuring the blended sound that Wagner would have expected.

'Siegfried Idyll', that follows, is given a ravishing performance in the usual full orchestral version,
though here it possesses an almost chamber music quality thanks to the sensitivity and suppleness of the string playing that never overwhelms the winds. There are many subtle interpretative touches in this performance including the touch of portamento at 1'27” - a rather unexpected, not to say disconcerting, surprise.

The remainder of the disc consists of three magnificently executed excerpts from 'Götterdämmerung' played here without a pause between them. 'Dawn and Siegfried's Rhine Journey' is performed in its usual truncated concert garb that omits any the music from the opening scene between Siegfried and Brünnhilde. This is followed by a smouldering and disciplined rendition of 'Siegfried's Funeral March', but perhaps the most interesting of these excerpts is the 'Immolation scene' that features Petra Lang as a feisty Brünnhilde. Lang's outstanding Wagnerian credentials are already well known and she has recently added the role of Brünnhilde to her repertoire - heard here on disc for the first time; though she will be singing this role in both 'Die Walküre' and 'Götterdämmerung' in Marek Janowski's forthcoming complete 'Ring des Nibelungen' for PentaTone.

Petra Lang is usually regarded as a mezzo-soprano, but she possesses a voice that encompasses a wide vocal range, and this, combined with her clarity of diction and expressive communication of the text, makes her a formidable exponent of this challenging role. The high notes are delivered with laser like impact and accuracy, yet she can be meltingly tender (as for instance in the passage beginning “ Alles! Alles! Alles weiss ich:” ). Occasionally one senses a touch of strain in her delivery, but overall this is a most arresting performance. The orchestral passage that follows Brünnhilde's final words and takes us to the end of the opera is superbly played by the BFO and quite overwhelming in its impact. A nice touch is the inclusion of Hagen's final words “Zurück vom Ring” sung by a member of the orchestra.

One minor blemish is that proofing of the booklet failed to pick up that more than half the texts and translations for the Immolation scene are missing.

Jared Sacks and Hein Dekker's 5.0 DSD recording made in the Palace of Arts, Budapest in January 2012 is superlative. The realistic image of a large orchestra created in one's listening room is phenomenal and something all audiophiles will definitely wish to experience.