Apologies for my ignorant comment re Brad Michel's other recordings. His partial discography as producer and/or engineer (on his website) runs to hundreds of titles. Discogs ... 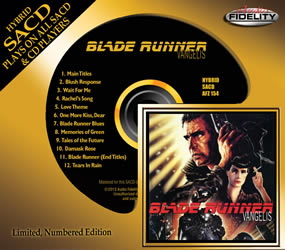 
The BLADE RUNNER soundtrack was composed by Vangelis for Ridley Scott's 1982 film considered one of the finest sci-fi movies ever made. It is mostly a dark, melodic combination of classical compositions and synthesizers which mirrors the futuristic film noir envisioned by Scott. The soundtrack holds legendary status and at the time was well-received by fans and critics including Best Original Score nominations for a BAFTA and Golden Globe yet, except for a few cuts, it was not released until 1994.

The movie remains a classic film with a long list of popular movie stars including Harrison Ford, Daryl Hannah, Rutger Hauer, Sean Young, and Edward James Olmos most of whom appear on this hybrid SACD in movie dialog samples mixed into the 12 tracks of nearly one hour of music. Vangelis makes each track flow into one another. The soundtrack features vocal contributions from Demis Roussos and the sax solo by Dick Morrissey on "Love Theme." The colorful 12-page booklet includes many stills from the film. BLADE RUNNER is a timeless classic on film and now on hybrid SACD.

I don't see much point to this one - it sounds *identical* to the regular RBCD releases, and waveforms clearly indicate it was mastered from 44.1khz PCM.

Save your money and buy any of the early RBCDs - they'll sound just as good and are likely to come from the exact same PCM source as this SACD. As much as I love this soundtrack this just isn't worth it.